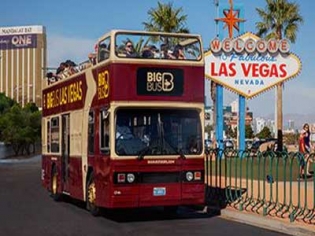 Enjoy a tour of Las Vegas at your own pace in one of the English-style double decker buses that roam the city allowing you to hop off and back on at your convenience.

The Classic Hop On and Hop Off Big Bus tour includes two routes.  The red route covers stops on The Strip; the last stop at the MGM Grand is where it intersects with the blue route which takes you downtown with 9 more stops.

The Strip:  Hop on, Hop off locations:

Downtown: Hop on, Hop off locations:

Duration: 3 hours (if you don’t hop off and on)

The Night Tour is a 3.5 hour panoramic tour that originates from either Circus Circus or Excalibur and will take you through the Strip to see all the famous landmarks all lit up.  It then takes you into Downtown and you have a brief walking tour and then have time to immerse yourself into the Fremont Street experience.

Tickets begin at $45.  Child admission applies to children ages 5 to 15. Children 4 and younger may ride for free, but may need to ride on a lap if seats are occupied by paying customers.