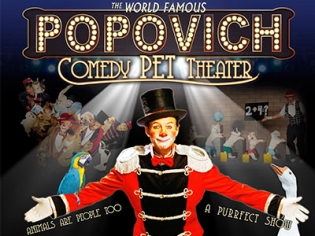 This special offer is for 50% off of the ticket price! Promo code loads automatically, must click "Apply" for the discount to apply to the order. Take advantage of this 50% online only discount today!

A comedic circus-style performance for the young and young at heart. Animal lovers will delight in this show using rescued animals who steal the spotlight performing various tricks. Also featuring jugglers, gymnasts, and other circus acts. Voted Best Family Show in Vegas!

Russian-born Popovich is a fifth-generation circus performer who brings his talents and skill from European circuses to the Strip with a variety of sideshow acts and trained animal skits which will delight all ages. Although Popovich is the star of the show with his comedy and juggling, the rescued animals steal the spotlight with their adorable antics.

Popovich also has several featured artists who showcase their talents throughout the show, including his daughter who dances and twirls a baton with aplomb. With over 30 trained animals, including cats, dogs, parrots, and a miniature horse, the revue showcases the talents of each animal. You will be laughing from the beginning to the “tail” end! An old-fashioned, traditional-style circus act that is fun for the whole family.