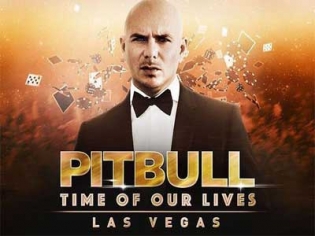 Pitbull continues his hit residency at Plant Hollywood with his Time of Our Lives tour.  The international superstar, known as Mr. Worldwide, was the first rapper to get a residency and it has been a huge hit.  You may know him as a rapper, but he is also a musician, performer, businessman, fashion icon and actor.  Get your tickets now because his concerts sell out worldwide.  The party atmosphere is contagious with his frenetic stage performance, his sexy dance team, and his energetic high-octane maneuvers.  The bilingual show has the audience dancing and singing along with him.  It’s obvious that Pitbull is not only having the time of his life, but wants to give the audience the same.