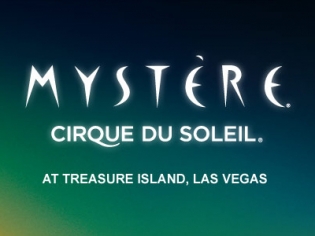 Prices start a low as $80 for Cirque du Soleil Mystere.  Be sure to compare all the promotions to get the best rates on your tickets.

Book your tickets for Mystere online and save. Save up to $70 off tickets to one of the hottest shows on the strip at Treasure Island Las Vegas.

Described by the show’s director Franco Dragone as a celebration of the cycle of life, Mystere is the first Cirque Du Soleil show to grace Las Vegas Boulevard, making its debut in 1993.

Mystère has been around Las Vegas longer than any of the other Cirque Du Soleil shows and continues to be a favorite among locals and tourists alike. The show is presented with a circus-like theme but goes above and beyond by showcasing the talents of some of the most skilled acrobats, contortionists, and dancers that you will ever see.

Mystère is a culmination of varying acts that seem to defy human capabilities. One of these acts, known as Aerial Cube, features a metal cube being juggled by a performer while he leaps through the air and performs a ballet. There are also comedic moments during the performance, such as one instance where a giant baby played by a fully grown man pouts and chases a large bouncing ball across the stage.

There are many feats of strength, flexibility, and coordination throughout Mystère’s performance to keep you fully engaged in the excitement. When you see this show for the first time, you immediately understand what makes it so well received and loved by those who have already witnessed the fantastic world of Mystère.