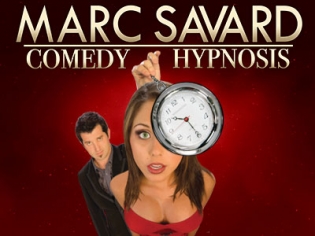 There is no better way to save than to get 50% off your tickets. Promo code loads automatically, must click "Apply" for the discount to apply to the order. Get your tickets starting at $50 before taxes and fees. 50% Off tickets are available for purchase only online.

Although his name is on the marquee for this hilarious show, Marc Savard puts hypnotized volunteers front and center by making them perform zany actions before a crowd at his Comedy Hypnosis show. You can See the show or Be the show at the V Theater at Planet Hollywood!

Marc Savard Comedy Hypnosis is a raucous show that features audience volunteers performing crazy and sometimes embarrassing actions in front of strangers while under the influence of hypnosis. Marc Savard uses his talents to propel the action but takes a back seat to allow the antics of his “subjects” to provide for the evening’s entertainment. Audience members help with the hilarity by suggesting commands for the onstage volunteers.

Savard begins each show with an explanation of what makes a good candidate for hypnosis – more importantly, he requests that you have a fun and outgoing personality. Chairs are set up onstage for volunteers to take their place, at which point Savard performs exercises to lull them into subconscious submission. Once they are teetering on their seats with eyes closed, the mayhem begins. He starts with group exercises asking his new cast to awake and perform as musicians in an orchestra. With this routine, the audience gets a taste of what’s in store, and Savard can then choose his final selections to perform the deeper stages of hypnosis.

Marc Savard Comedy Hypnosis is an adult-oriented show and pushes volunteers into wild and embarrassing scenarios in front of a live audience. You can’t control your laughter from the zany exhibitions that Savard can convince people to display under his hypnotic control.