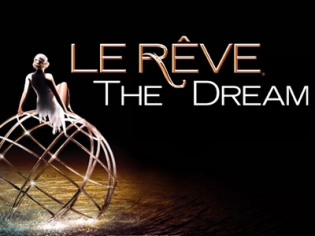 When Steve Wynn opened the Wynn Las Vegas in 2005, he knew that he would have to come up with a show that was as lavish and well-produced as the offerings of his competition on the Las Vegas strip. Le Reve is inspired by the famous artwork of Pablo Picasso which bears the same name and is an artwork that also happens to be a prized possession of Wynn. The show has been revamped for its 10 year anniversary by Maksim Chmerkovskiy, who has choreographed a new scene.

The key element to Le Reve is the magnificent aquatic pool that acts as the show’s stage. The 1608-seat theatre circumferences this amazing feature that spans 68-feet in diameter and is 27-feet deep. Many of the most fantastic elements of this amazing set happen below the water’s surface. There are elevators and platforms that raise and lower during specific pieces of action and actors appear from and vanish below the surface miraculously during the show.

Le Reve features a very loose plot line that brings audiences away from reality and engulfs their senses in an altered world. As the title suggests, it really does feel like a dream and the visual effects are some of the best of any show that Las Vegas has to offer. With such high production values and amazing performers, Le Reve definitely provides the catalyst for more than a few moments of awe.