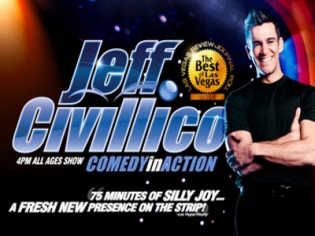 Known originally as a talented juggler, Jeff Civillico is also a master entertainer with a zany personality. He blends physical stunts with audience interaction to create a show that appeals to all ages. His one-man show will have you belly laughing the whole way through and amazed at how funny and talented one man can be!

Is it art? Is it a circus act? Maybe a comedy routine? Whatever you want to call Jeff Civillico’s show, it is hilarious, entertaining and unique. Jeff mingles in the audience prior to the show, then jumps on stage with boundless energy to begin an hour of non-stop comedy and entertainment. Jeff uses volunteers from the audience to help him with much of his physical comedy including a unicycle and straitjacket.

Full of personality and charisma, Jeff is genuinely funny and spontaneous and it is obvious that he loves what he is doing. The show is appropriate for children and Jeff goes out of his way to include them in the interaction. Some of the humor for the adults will purposely go over their heads, but they will enjoy it and want to hang around afterwards for the autograph session that Jeff is always willing to give! It is a great way to spend an hour or two out of the heat and take a break from the pool.