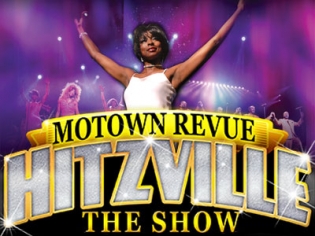 This promotions is for 50% off tickets to Hitzville! Promo code loads automatically, must click "Apply" for the discount to apply to the order. Hitzville the Motown revue, takes place in the VTheater inside of the Planet Hollywood, Miracle Mile Shops. 50% Off available online only.

Hitzville Motown brings audiences all the classic hits of artists such as The Temptations, Gladys Knight and the Pips, The Four Tops, and Diana Ross & the Supremes. The show features a full band, a fantastic female trio, a quartet of scorching men, and Hitzville Motown’s very own Dreamgirl, Ms. Jin Jin Reeves.

Hitzville Motown takes audiences on a journey back to the golden era of Motown with classic hits performed by tribute artists of such luminaries as The Four Tops, Diana Ross and the Supremes, and The Temptations. The show features multi-talented performer and Hitzville Motown’s own self-proclaimed Dreamgirl, Ms. Jin Jin Reeves.

Ms. Reeves started her career in Detroit, Michigan, at an early age. She was very much into dancing, singing, and songwriting, and some of the most influential artists of the period recognized her talents. She has since been a contestant on “Star Search” and even appeared in the Steven Speilberg movie “Amistad,” in addition to recording a studio album.

When all of the elements of Hitzville Motown come together, it results in a fantastic evening of musical performances that will have you dancing in your seat. In addition to Ms. Reeves, Hitzville Motown incorporates the talents of a trio of female singers, four amazing men, and a full accompanying band. This show is a celebration of an iconic period in music history that provides endless moments of nostalgia sure to have you in awe.