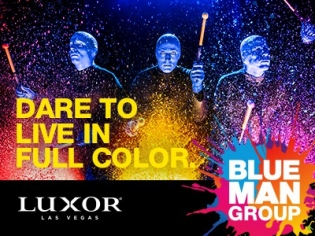 Save some green when going to see Blue Man Group and making your reservation online.  Book and save with tickets starting at $68 before taxes and fees.

Blue Man Group is an avant-garde performance that blends music, comedy, and multimedia in wildly creative ways. There are percussive pieces that utilize instruments made out of everyday items in inventive ways by three charismatic individuals covered in blue paint and black attire who never actually speak.

Blue Man Group is an interactive spectacle that is put on by three individuals covered in blue paint and all-black attire. The performers never speak a single word, but still somehow manage to evoke all types of audience responses ranging from joy, amazement, and laughter. The performance of Blue Man Group is a blend of music, comedy, and multimedia that is avant-garde at best. Portions of the show include the “Blue Men” banging out percussive, musical pieces using wacky instruments created using such everyday items as plumbing pipes.

Describing the performers in the Blue Man Group is somewhat of a challenge. They seem confused at some points about the people and world around them, and their discovery is often compared to that of an alien or a developing child – but no one is 100% sure of their intended representation. The moments in the show when the performers seem bewildered by modern culture are what provide some of the best comedic relief.

At the heart of the Blue Man Group’s mysticism lies amazing audio and a visual art piece that is put on by extremely talented musicians and stage performers. The Blue Man Group’s rotating cast provides a memorable show at the Luxor Las Vegas for audiences of all ages.