Alain Nu – The Man Who Knows 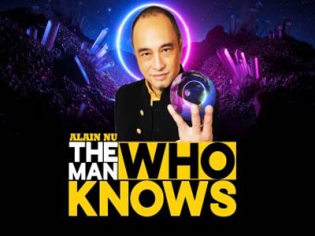 Take advantage of this online exclusive offer today. Get up to 42% off your tickets to see Alain Nu - The Man Who Knows.

Book online to get your discount in advance. Save up to $17 off tickets to see Alain Nu when you book today.

Heralded as one of the world’s foremost mentalists, Alain Nu has performed around the globe, from cruise ships on the high seas to three U.S. presidential inaugural celebrations. The gifted performer also gained acclaim for his TLC miniseries, “The Mysterious World of Alain Nu.”

Prepare to have your mind blown (and read!) as Nu combines his fascination with hypnosis and phenomena to produce a spellbinding show that leaves audiences bewildered and amazed. Alain Nu – The Man Who Knows showcases the mentalist’s remarkable ability to read minds, predict the future and venture into the world of mysticism.