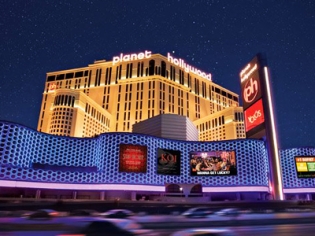 Receive 10% off at Caesars Entertainment Resorts with this special offer. Members of the Military(Service Member, Veteran, Military Spouse, Military Family, Retiree), Students, First Responder(EMT, Police Offers, Firefighter), and Teachers are eligible for the discount. To confirm eligibility to receive the discount on your stay at any Caesars property, simply click the buttons labeled Troop ID, First Responder ID,Student ID or Teacher ID located under the search widget on reservations pages(seen after you click "Learn More").

Center stage on the Strip, Planet Hollywood Resort offers celebrity-style accommodations and entertainment. You’ll see movie memorabilia displayed throughout in custom-designed cabinetry. Home to concert venues, a Mandara Spa, and the Miracle Mile Shops, Planet Hollywood will make you feel like a star.

Infused with a shot of celebrity culture and a movie theme, Planet Hollywood Resort is unpretentious and welcoming. VIP-approved accommodations include a wide range of suites, some of which welcome pets as part of the PetStay program.

Shop like the A-list at the adjoining Miracle Mile Shops, with over 170 stores and dining options.

The casino features the Pleasure Pit offering the thrilling experience of blackjack and roulette dealt by beautiful women clad in lingerie with go-go dancers roaming the crowd.

Dining is an experience at the Strip House for steaks or at Koi for Japanese Hollywood-style. Entertainment venues feature red carpet movie premieres, pageants, and concerts. Choose from a rotating lineup of stars-in-residence or the many musical and comedy shows.

More laid-back experiences await at the Mandara Spa, which highlights treatments and therapies from exotic locales around the world. The Pleasure Pool offers swimming and sunbathing and even has weekend entertainment. You may not be a celebrity, but you will feel like one after enjoying all Planet Hollywood has to offer.

Spa/Salon: Mandara Spa is an exotic oasis that will calm and soothe your senses. Indulge in the Ten Cultural Touches of Elemis or the Well-Being Massage. A fitness center and full-service salon are in the spa as well.

Pool: Scene Pool Deck features two outdoor pools on the sixth floor with Jacuzzis, two pool decks, two bars, and a pool cafe. Fifteen cabanas are available for rent. You could even try surfing on the Flowrider!

Shops in the Miracle Mile Shops include the following:

All Shook Up is a popular tribute to Elvis Presley; the only one on the Strip that is all-Elvis, all the time! No other performer had a bigger influence on rock and roll, so roll in to see this tribute performance.

The Backstreet Boys are currently on a world tour. Check back frequently for a new residency announcement.

If you've ever wished that you could’ve seen the Beatles live in concert when they were in their prime, Beatleshow is as close to the real thing as you can get. Featuring live performances without the use of pre-recorded backing tracks or lip-syncing, this high-spirited show will transport you back to the Fab Four's heyday.

Opening May 2019, Christina Aguilera takes the stage in Las Vegas for a limited residency. Come Xperience all her chart-topping songs at the Zappos Theater.

Celebrating 25 years, this topless revue incorporates music, dance, comedy and, of course, beauty in modern and classic favorites. Known as one of the sexiest, most sensual shows to ever grace a Las Vegas stage.

Criss Angel, the most-watched magician in television history and recently awarded “Magician of the Century,” is teaming up with Cirque Du Soleil to bring his fantastic visual illusions to the stage in this unique exhibition that will leave audiences in a state of shock and awe.

Opening August 2019, Def Leppard takes the stage in Las Vegas for a limited residency. The Sin City Residency will rock the entertainment landscape in Vegas!

A comedic circus-style performance for the young and young at heart. Animal lovers will delight in this show using rescued animals who steal the spotlight performing various tricks. Also featuring jugglers, gymnasts, and other circus acts. Voted Best Family Show in Vegas!

Hitzville Motown brings audiences all the classic hits of artists such as The Temptations, Gladys Knight and the Pips, The Four Tops, and Diana Ross & the Supremes. The show features a full band, a fantastic female trio, a quartet of scorching men, and Hitzville Motown’s very own Dreamgirl, Ms. Jin Jin Reeves.

Some of the best comics from across the country perform nightly at the Las Vegas Live Comedy Club.

Although his name is on the marquee for this hilarious show, Marc Savard puts hypnotized volunteers front and center by making them perform zany actions before a crowd at his Comedy Hypnosis show. You can See the show or Be the show at the V Theater at Planet Hollywood!

A wild sense of humor and top-notch magic and illusions will delight the entire family. At Planet Hollywood’s V Theater, Nathan Burton brings his brand of magic to the stage that will have you and the family laughing out loud and shaking your head in amazement at the same time.

A perennial crowd-pleaser, Shania Twain brings her “Let's Go!” tour to Las Vegas. The country music star reaches all genres of music fans and joins the ranks of Celine Dion and Cher as one of Las Vegas's top divas.

Let loose and unleash your inhibitions when you indulge in the Stripper 101 pole dancing class. Where better to learn sexy striptease moves and lap dance techniques than in Vegas? The V Theater is set up as a nightclub with lighted poles and a cocktail bar.

Five male rock voices, the best the UK has to offer, bring a new sound to familiar rock hits.

Gerry McCambridge is entertaining, amusing, and suspenseful in his Vegas show “The Mentalist.” He reads minds and predicts the outcomes of various audience participation situations. Humor and magic intertwine in this live performance of mind reading and illusion.

Unreal – The Way You Make Me Feel

A popular tribute to Michael Jackson and Britney Spears; the only one that combines the talents of the two superstars in the same performance.

A true variety show with comedians, jugglers, acrobats, roller skating gymnasts, and magicians. There is something for everyone at this show which features a selection of talented specialty acts that can change periodically.

With an amazing cast of over 40 performers, Vegas! The Show takes you back in time to experience Vegas the way it once was. From The Rat Pack to Elvis, with big bands and showgirls, you get the best of Vegas all in one place.

A zombie musical set in the atomic age of 1958, Zombie Burlesque is a comedy with a live band, two singers, many zombie dancers, and an emcee that brings the audience into the performance.