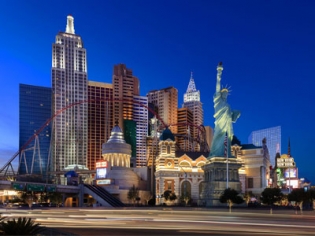 Treat yourself to a Spring indulgence package at over three hundred restaurants, bars, lounges, and nightlife across participating MGM Resorts Las Vegas destinations. Receive a $30 Food and Beverage credit each night of your stay.

AAA Members get special savings at New York New York Las Vegas. Reserve now and get up to 25% off your rates. Must present AAA card at check-in.

Book now to save with the flex rate discount at the Aria Las Vegas. No minimum night stay required.

If you're a senior, you can now save 5% off standard rates for rooms at New York-New York, seven days a week. To qualify for the Senior Rate, you must be 62 years of age or older as of check-in date. Valid government-issued photo identification must be presented at check-in to confirm your eligibility.

Get a slice of The Big Apple with a piece of Vegas magic at New York-New York. This half-size replica of the NYC skyline features the Statue of Liberty, Brooklyn Bridge, Empire State Building, and Chrysler Building, to name just a few! You can also visit the Coney Island Arcade or ride a roller coaster through the skyline.

Located near the southern end of the Strip, New York-New York is at the heart of all the action. The facade recreates Manhattan’s skyline with a half-size replica of the Statue of Liberty, a 300-foot Brooklyn Bridge, and towers mimicking the skyline, so you can choose to stay at the Empire State Building or the Chrysler Building.

Visit the ethnic flavors of Chinatown or Little Italy throughout the resort. Dine at Gallagher’s Steakhouse or Chin Chin Cafe & Sushi Bar. Of course, there is a New York Pizzeria and Nathan’s Hot Dogs too! Coyote Ugly, the Nine Fine Irishmen, and the Bar at Times Square offer nightlife options.

Guest rooms are all deluxe and offer upscale amenities like marble or granite bathrooms, 40” TVs, iPod stations, and much much more.

For the young and adventurous at heart, ride the Big Apple Coaster at 67 mph, dropping 144 feet through the skyline and twisting through two inversions. Stop at the Coney Island-themed Big Apple Arcade with carnival and arcade games.

If table games are more your speed, the casino offers those along with slots and keno.

Make the most of your trip to Vegas with a stay at New York-New York.

Spa/Salon: A tranquil garden retreat in the middle of New York-New York will calm and relax you. Choose from various treatments, including hydrafacials, peels, and collagen masks. The adjacent salon across the hall offers manicures, pedicures, and hair services.

Pool: The outdoor pool area includes a large pool surrounded by a sundeck and three spa tubs set amid the palms and waterfalls. Cabanas with TVs, phones, refrigerators, and fans are available for a fee. Food service and package deals are available poolside.

Shopping: Shops in New York-New York include the following:

Terry Fator: Who's the Dummy Now? is a one-of-a-kind show that mixes elements of the "America's Got Talent" winner's unparalleled ventriloquism, spot-on celebrity impressions, and a seven-piece band that offers humorous takes on artists such as Cher, Maroon 5, and Garth Brooks.

Is risque, raunchy, bawdy, sexy, sensual, steamy and racy enough to get you to the show? Or do you need hilarious, with dancing and acrobatics? Either way, you will LOVE Zumanity by Cirque du Soleil. It is an adults-only cabaret burlesque-style spectacular which explores the different realms of sexuality through imagery, dancing and comical vignettes.