Why You Should Visit Grand Bazaar Shops Las Vegas 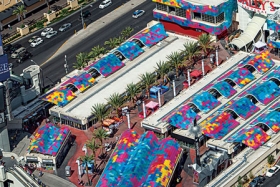 In 2015, the Grand Bazaar Shops at Bally’s replaced the beautiful greenery and an iconic moving walkway that lead visitors from the Vegas Strip into the casino. Those trees and bushes weren’t generating any revenue and had to go! The new shops may have taken awhile for some Las Vegas visitors to get used to but the Grand Bazaar Shops seem to be coming into their own.

Since first opening, the shops have undergone many changes and additions. In fact, the changes are continuing. Eater Vegas recently reported that Vegas Exp will be taking over space previously used by numerous stores. They say to “expect a similar inventory of souvenirs, apparel, beer, wine, liquor and snacks found at the original Grand Canyon Experience.”


If you haven’t been to the Grand Bazaar Shops in awhile you might be surprised by some of the big name bars and restaurants that have been added and that will be opening soon.

In the past year Wahlburgers, Giordano’s Pizza, and Redneck Riviera (a bar from country music star John Rich) have become anchor tenants at the Grand Bazaar Shops. More recently two beer-centric bars, Born and Raised Craft Pub and Sin City Brewing, have opened. There’s even a 24-hour Subway now in case you have the late night munchies walking down the Vegas Strip.

But wait there’s more! The following dining options are opening soon at the Grand Bazaar Shops.

Prices are rising on the Vegas Strip and this two-acre outdoor shopping complex might be expanding at the right time. The Grand Bazaar Shops offer a lot of affordable bars, restaurants, and retail shops. You can find more information at grandbazaarshops.com.