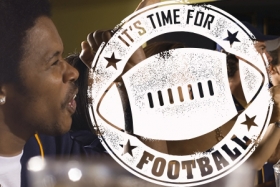 There’s a new football party where you can enjoy the games outside but shielded from the sun. Beginning Sunday, September 10, the Downtown Las Vegas Events Center will be showing NFL games. The space will be known as the “Downtown Watch Zone” and will be the largest Downtown Las Vegas football viewing party.


If you’re not familiar with the Downtown Las Vegas Events Center, it’s the open space across from The D that has been used mostly for concerts since opening. In between concerts, there have been fights and another one off events including a huge Super Bowl party earlier this year.

The Downtown Watch Zone will open at 9am and the event will run until 8 p.m. for football on the following days:

Admission to watch the games is free but seating is first come, first served. If you don’t want to worry about arriving early to get a seat you can reserve a VIP table for up to 12 people. There will be $15 bottomless mimosas served from 9 a.m.- 1 p.m. along with beer buckets and cooler specials. On site food options include American Coney Island and Project BBQ.

There’s a William Hill sportsbook across the street at The D. If you plan on wagering on the games but aren’t sure who you want to bet I recommend opening a mobile sports betting account. This will allow you to place football bets from your mobile phone anywhere in Nevada. You can find more information here.

Other Places To Watch Football In Downtown Las Vegas

Not every casino in Downtown Las Vegas has A sportsbook. Here’s a quick look at each sportsbook:

There are some other options to watch football in downtown Las Vegas that don’t involve a sportsbook or a big viewing party. These bars and restaurants should have enough TV’s to satisfy your needs