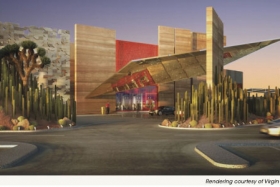 You have about a year to pay your respects to the Hard Rock Hotel & Casino. The property will become Virgin Hotels Las Vegas in 2020.

This purchase isn’t exactly news. Virgin Hotels announced that they were looking to get into Las Vegas back in 2017. Speculation immediately circled around the Hard Rock being the target landing spot. That rumor became fact when Hard Rock was purchased in 2018 by Sir Richard Branson and a group of investors.

“The property’s project deadlines were fluid and the scope of the project continued to expand,” said President and CEO of JC Hospitality LLC and Hard Rock Hotel & Casino, Richard “Boz” Bosworth. “Based on the additional improvements that we have identified, the deadline to begin work has shifted to early 2020. Significant construction activities remain ten months away and the property will remain open for business without any disruptions to our guests and team members through Super Bowl of 2020.”

Similar tothe transformation of Monte Carlo into Park MGM, the Hard Rock will be open during most of the renovations. There will be some interruptions and a temporary closure but much of the conversion will be done behind closed doors (and walls).

A new restaurant is already open at the Hard Rock. CRAFT + KITCHEN has taken over the restaurant formerly known as Culinary Dropout. The new restaurant keeps a similar gastropub theme. Unfortunately, there is a new menu and the adorable mini grilled cheese is no longer available.

There’s also a new pool area. The Breathe Pool Lounge is located on the second level between Vanity Nightclub and Reliquary Spa. This new 21+ dayclub has two secluded pool area. The club looks down onto the other pools and has views of the Vegas Strip.

Virgin Hotels Las Vegas hasn’t revealed all of the plans for the new property. This will be a relatively modest renovation with a budget of around $200 million. For reference, MGM Resorts spent more than $500 million creating Park MGM. Station Casinos is spending more than $600 million renovating Palms.

We do know that all of the hotel rooms and the 5-acre lagoon pool complex at the Hard Rock will be renovated. Vinyl will be expanded and become a new nightclub.

One venue that will remain when Virgin Hotels opens in 2020 is The Joint. The Las Vegas Review-Journal expects a booking partner with new residencies to be announced in the future.

You can do a little planning in advance if you’re looking for discounted rooms when Virgin Hotels Las Vegas opens. The casino-hotel will have multiple loyalty clubs.

Virgin Hotels has its own loyalty program called “The Know” that connects all of their properties. The newest Virgin property will also be part of the Hilton loyalty program with its inclusion in the Curio Collection. The casino will likely have a separate gaming loyalty club when the property opens.