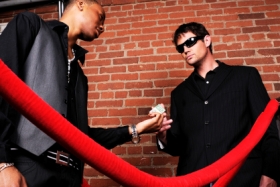 Nightclubs are a big deal in Las Vegas. In fact, 8 of the top 10 nightclubs in America are located in Las Vegas. There’s always been demand to get into the Vegas nightclubs but nothing like this. Now the demand is so insane that the lines are huge at clubs up and down the Vegas strip instead of just one or two hot spots. The clubs are so packed at night that almost every nightclub has a dayclub where you can soak in some rays while catching a world famous DJ drop some beats.

The increased demand to get into clubs allows the operators to charge more money and increase how strict they are with dress codes and guy codes. You now have to bring an equal amount of guys and girls with your party to enter the club. This isn’t anything new but it has never been strictly enforced at all times and at every club. The newest and most grand club on the strip, Hakkasan, isn’t hiding the fact that you can’t have a party of just guys. What’s a bro supposed to do with his bros?

Forget the club. That’s what you do. Well, not entirely. There are a lot of “VIP Hosts” in Vegas. There are also a lot of jokes about people being a VIP Host. Many of the VIP Hosts are just “hosts” employed by the club just trying to fill the room while others are just freelance people that are paid per person that they get into the club. They often have access to get you on the guest list for free entry but that’s about it. You can do that yourself by contacting most clubs via social media. That will save you a few bucks but you will still have to wait in the long line of normal people. You’re certainly not VIP and you’re certainly not getting any special treatment.

If you really want special treatment you can find it. You can get anything you want in Vegas. There are “VIP Hosts” that are actually VIP Hosts without the quotations that can essentially get you anything (legal) you want at a club or anywhere else in town. You’ll have to pay a little more then the actual cost but it’s worth it if you want a special experience or just an experience you can’t get yourself. If you want to hit the club without waiting two hours to get in that’s no problem. I don’t go to nightclubs often but when I do I never wait in lines. My time is worth the few bucks that it will cost to skip through the lines.

If you want a specific table or cabana at a club that’s not a problem you can secure that with a VIP host that has been working with the clubs for years. Better then a concierge, a host can secure you specific tables in a restaurant while getting you VIP passes to a show and then into the club without ever having to lift a finger. They can plan everything you’d want for a trip to Vegas.

Whether you’re coming to Vegas for a special weekend with your significant other or coming out with a group of friends you may want to do a google search for VIP Hosts in Las Vegas. There are many companies and people that claim to offer VIP services so you’ll want to do a little research before deciding on a host. Websites like Yelp and Trip Advisor are useful for recommendations and learning about other experiences with the company but you can learn a lot if person or business is accredited by the Better Business Bureau. BBB is a good sign of a legit company and not a fly by night operation.