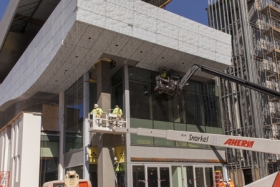 I don’t like to think about this in October but the year is coming to an end. The stores are skipping over Halloween decorations for Christmas and the Vegas nightclubs are heavily promoting their New Years Eve parties. With that in mind I figured that it’s a good time to look at where are the construction in Las Vegas stands and when we can expect some action. I’ll break it down by portion of the Vegas Strip moving south to north.

The main construction that you’ll see on the south end of the Vegas Strip is surrounding New York-New York and Monte Carlo. The casinos remain intact and have been operational while the frontage to the Vegas Strip is being worked on. When all is said and done, there will be a host of new shopping and dining options. Construction is still clogging up the streets but it seems to be on track for an early 2014 opening. Vegas Inc. has details on what shops and restaurants will be opening.

As you head north on the Vegas Strip you get a little time to breathe before you run into center strip construction. The small hotel formerly known as Bill’s Gambling Hall and Barbary Coast before that is currently undergoing massive renovations. These renovations have taken the hotel down to its studs. The hotel just parted ways with boutique hotel partner Gansevoort but will move forward with a different partner.

Down the strip a little the transformation of Imperial Palace to The Quad is almost complete. If nothing else construction outside on the Vegas Strip is complete which gives a little breathing room for pedestrians.

The majority of construction in the middle of the Vegas Strip surrounds The Linq. Good news for pedestrians is that most of The Linq construction has moved behind The Quad and Flamingo. The Linq will be a shopping and dining area which is anchored by a giant Ferris Wheel when all is said and done. The first shops will open in December and sporadically until everything is finished next summer.

Heading much further north on the Vegas Strip, past Wynn Las Vegas is the abandoned construction at Fontainebleau. This big sad blue building has nothing happening right now but is a reminder of when building in Las Vegas was booming. The boom is coming back to the north end of the Vegas Strip beginning with construction of SLS Las Vegas.

SLS Las Vegas is being built where the Sahara once stood. Everything besides the hotel towers has come down. Construction is moving at a brisk pace and the hotel should be open late next year. You can find details on the hotel on their website and get updates on the SLS Las Vegas blog.

Things are quiet across the street but next year construction will begin on Resorts World Las Vegas. This construction will continue through 2016. If Fontainebleau decides to re-start their project again we could see a cluster of construction on the north end of the Strip like we’re seeing on the south end right now.