by marc / Monday, 02 March 2020 / Blog Category: Entertainment and Everything Vegas. 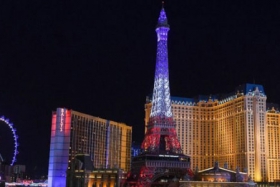 Las Vegas continues to build on the moniker of being the “Entertainment Capital of the World.” There’s some kind of new show, residency or concert announced almost daily. It’s difficult to keep track but we’re doing our best to offer both entertainment updates along with other Las Vegas news and tips.

In the latest entertainment round-up, we have news about a new residency, new limited engagement, the return of a resident artist, a residency extended, and a music festival lineup announcement. Whew! That’s a lot so let’s get to it.

You can read the full press release for more information.

Pitbull will return to the Zappos Theater inside Planet Hollywood Resort & Casino for the sixth consecutive year. This year he will have five high-energy performances of his new residency, “Pitbull – Get Ready Vegas”. The five performances will take place on the following dates:

Adam Lambert is bringing his talent to Las Vegas with a three-show limited engagement called “Velvet.” The shows will take place at The Venetian Theatre inside The Venetian. After performing in arenas with Queen over the past several years, fans will have an opportunity to see Adam perform solo in an up-close-and-personal setting in the intimate, 1,800-seat theater.

Derek Hough: No Limit will take place at Flamingo Las Vegas. “As a singer, dancer, instrumentalist and an overall crowd-pleaser, Derek is a true renaissance man, just like many of the greats that have played the historic Flamingo Showroom through the years,” said Jason Gastwirth, president of entertainment for Caesars.

Shows will take place on the following dates:

Carlos Santana’s residency, “An Intimate Evening with Santana: Greatest Hits Live,” will continue at the House of Blues Las Vegas inside Mandalay Bay Resort. This is the 8th year of Santana’s Las Vegas residency. New show dates are as follows:

Psycho Las Vegas will return to Mandalay Bay for a second consecutive year August 14 – 16. This festival literally takes over the entire property. This year there are four stages including the Mandalay Bay Events Center, House Of Blues, Mandalay Bay Beach and Rhythm & Riffs Lounge, located at the center of the casino floor.

This year features a more diverse lineup with punk and hardcore bands joining the wide variety of heavy metal bands.

You can find the full lineup and more information at vivapsycho.com.


Looking for something else? Find the latest in Vegas entertainment deals here.