Vegas Buffets Are Coming Back! 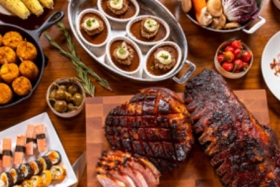 Buffets are back! Well, two buffets are back! The Cosmopolitan opened the Wicked Spoon buffet in April. Caesars Palace is opening its Bacchanal Buffet on May 20. These are the only two buffets open on the Vegas Strip as of the writing of this blog post.

There’s a reason for these two buffets to reopen while most in Las Vegas remain closed. Neither buffet is the classic “Vegas Value” buffet. These are both gourmet buffets with price points that can peak around $100 per person for dinner. The prices might be appropriate but the buffet isn’t the deal it used to be.

With this in mind, don’t be surprised to see the buffet at Wynn return this summer. While the food at this buffet is delicious and the service is great it’s difficult for some to spend $40 or more for a buffet. Then again, most sit-down meals at Wynn will cost $30 or more when drinks and taxes are added.

Don’t expect to see all Las Vegas buffets reopen. Most casino operators are no longer in the business of offering loss leaders to draw people into the property with hopes they’ll spend money elsewhere. Every part of a casino must be profitable nowadays. Not all buffets are profitable for casino operators.

Caesars CEO Tom Reeg has been adamant that buffets won’t return to their properties around the country unless they’re profitable. While the Caesars Palace buffet will return, the buffets at Caesars Las Vegas properties on the other side of the Vegas Strip may not. For what it’s worth, the South Point buffet is open for Bargain hunters.

The Bacchanal Buffet at Caesars Palace was a major transformation for the property when it opened in 2012. The Las Vegas buffet joined Wynn and Cosmopolitan with a gourmet offering. The buffet received a multimillion-dollar enhancement over the past year and will reopen offering more than ever.

Bacchanal’s seafood, carving station, American and Latin kitchens, as well as the entrance and dining room, have all received major upgrades and improvements. In addition to an all-new look, the menu features more than 30 new dishes.

“Bacchanal Buffet at Caesars Palace has been a world-renowned culinary destination for many years,” said Sean McBurney, Caesars Entertainment Regional President. “We are incredibly proud of all the work we have put into it over the past 14 months, from the design and construction to the research and re-engineering of the menu. We look forward to welcoming our guests back and seeing their faces light up when they experience and, most importantly, taste all the new enhancements.”

The Bacchanal buffet has nine open kitchens. Its new design will allow guests to have an improved view of the action. The buffet features an array of new, state-of-the-art equipment. Open-fire roasting grills will be used to prepare prime rib and other premier cuts. New steaming and refrigerated display systems will ensure dishes like crab legs are served market-fresh.

The Bacchanal buffet has upgraded its dining options. Take a look:

Bacchanal will reopen with dinner served Thursday-Monday from 4 p.m. – 10 p.m. Coincidentally, or not, the Wicked Spoon buffet at Cosmopolitan only serves breakfast and lunch at this time.