by marc / Thursday, 17 September 2020 / Blog Category: Entertainment and Everything Vegas. 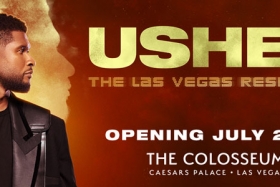 It’s been a strange year around the world with COVID-19 impacting just about everyone everywhere. One of the more abnormal events in Las Vegas – besides casinos closing – is the lack of big events. Vegas is an event-driven town and that’s what draws so many visitors. Whether the event is a convention, trade show, sporting event, or a concert there hasn’t been a single major event for people to attend in Las Vegas since March. In a perfect world, things will be different next year. One casino operator is planning as though major entertainment events will be able to take place by next summer.

Caesars Entertainment recently announced that international megastar Usher will perform a residency next year at The Colosseum inside Caesars Palace. YEAH!

The first show of this residency should take place in July 2021. There’s no indication of when large scale shows will return to Las Vegas at this time. However, the dates next year give everyone plenty of time to make plans. Hopefully, by the time the shows are scheduled, live events will have returned to Las Vegas.

“I have missed performing for my fans live and I am so excited to see them in Las Vegas,” said Usher. “My residency at The Colosseum at Caesars Palace will be full of surprises and an Usher experience like they’ve never seen or heard before!”

Usher challenges himself creatively and testing musical boundaries are characteristics that have defined his career since he was first discovered 20 years ago on “Star Search.” He’s been ranked by the Recording Industry Association of America as one of the best-selling artists in American music history, having sold over 65 million albums worldwide.

Usher is truly a dynamic performer. He’s more than just an R&B singer with great songs. He’s a fantastic dancer and he even discovered some other popular artists. The multi-talented showman will give his fans an experience that only Usher can deliver.

This exclusive,”only-in-Vegas” spectacular will take place at The Colosseum, a 4,300-seat world-class performance venue. The Colosseum will allow Usher’s fans a once-in-a-lifetime opportunity to see him up close and persona instead of inside a huge arena. The show will feature an impressive repertoire of smash hits spanning Usher’s 20-year career. You’ll be able to see and hear his early records and more recent songs (above), as well as new music.

The 12 performances going on sale are:

Not that anyone asked but this is my kind of Usher jam: