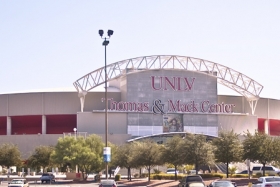 I grew up in New York City and college sports was something I’d watch on TV but they weren’t real since none were from NYC. New York City is for the big dawgs. There are 2 NFL, 2 MLB, 2 NBA teams and 3 NHL teams. There is a lot of pro action happening all year around. Las Vegas is home to a lot of great things but sports isn’t one of them. Sure there’s the Las Vegas 51′s and UNLV Runnin’ Rebels but that’s not real, errr pro sports.

Thankfully I can satiate my cravings for professional and major college sports any time by heading to the sportsbook to watch and gamble on games. If I’m at a nicer sportsbook, like The Venetian or Red Rock, I can even drink for free while I play video poker and watch my sports bets unfold. Yes, I need stimulation from all angles. Seriously there’s nothing like it.

Since Las Vegas is so close to Phoenix, Los Angeles and San Diego there are good amount of exhibition games to fill any seasonal needs the sports fan may have. Before the seasons begin in the professional sports leagues there are usually games held in one of the casino arenas or the Thomas and Mack Center. Since 2004 the NBA has held its Summer League in Las Vegas at the Thomas and Mack Center and Cox Pavilion on the campus of UNLV. That tradition continues this year between July 12 and July 22.

NBA teams come to the Summer League to have their younger players get competitive practice in the off season. The Summer League is set up very loosely so most seats are general admission and you can watch games inside either arena. If you’re a fan of one of the competing teams (see list here) this a great way to see some of the best young players on the team up close for relatively low prices.

21 NBA teams and a team of NBA D-League Select players will compete for the inaugural NBA Summer League title. This year’s teams includes 11 of this season’s NBA Playoff teams, along with 10 non-playoff teams. For the first time, the NBA Summer League will culminate with a single-elimination tournament to crown a champion.

If you’ve been to Summer League games in the past you’ve had a chance to see players like Kevin Durant, Blake Griffin, Chris Paul and Kyrie Irving play before most people. This year should have 8 of the top 10 players chosen in the NBA draft as well as last year’s number 1 pick Anthony Davis.

The best part about the NBA Summer League is the cost of tickets. Tickets for adults are $25 per session (day or night) or $150 for court side seats. Children and seniors are $15 each. The price is per session and each session usually has about 4 games between the two venues and last about 4 or 5 hours which makes the NBA Summer League a great bargain. If you live in an NBA city you probably pay $25 just for a couple beers.

The NBA Summer League sold a record number of tickets last year and they expect this year to be even more crowded. Team schedules aren’t out yet but if the teams playing don’t matter you can already buy tickets at UNLV Tickets.