Stratosphere renovations on the horizon 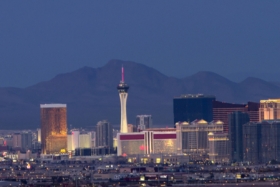 Shortly after the deal was closed, the parent company announced there will be upgrades and integration between the properties. Well, it’s time to get ready for a new era for the Stratosphere. There was a major redevelopment plan announced on the most recent earnings call for Golden Entertainment.

Golden Entertainment plans to invest $140 million in the Stratosphere over the next three years. All parts of the casino and hotel will be upgraded and renovated. They’re even planning on adding meeting and conference space that was previously unused at the casino-hotel.

These are long-term changes that will begin in the second quarter of 2018 and continue through the summer of 2021. Let’s take a look at the redevelopment plans for the Stratosphere.

Dining
There will be a new steakhouse, noodle bar, Starbucks and an unspecified number of new food outlets developed for the Stratosphere throughout the renovation process. Additionally, they will refresh the Top of the World restaurant in the Stratosphere Tower.

Drinking
There will be a new bar added this year that looks out to the casino floor and another added to the thrill ride area. You might want to wait until after the rides before you grab an adult beverage.

A new gastro-brewery will feature Golden Entertainment’s signature branded craft beer and menu. The new bar and restaurant will connect with a state-of-the-art sports and race book.

Exterior
Golden Entertainment plans to update the signage and lighting outside of the Stratosphere. Expect to see a fancy new state-of-the-art digital sign. This will also include new branding for “The Strat” which you can see in the renderings above.

The Stratosphere could definitely use some cleaning up. They have a very dedicated customer base but these changes should help bring new guests to the iconic casino-hotel. I hear that the PT’s Pub players club will join the new Stratosphere players club later this year. There are a lot of potential synergies that could make the Stratosphere home for locals and tourists alike.