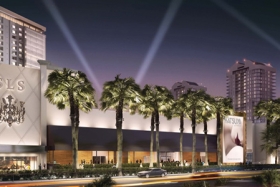 Last week we decided to look back at some of the best hotels in Las Vegas from the 50’s and 60’s. It’s not always easy to let go of the past but as we head into the future of the Vegas Strip it’s nice to remember what once was. One of the hotels we highlighted was the Sahara. The Sahara closed a couple years ago and will become the home of the new SLS Las Vegas when it opens later this year. All of the extinct hotels from the 50′s and 60′s have been destroyed but that won’t be the case with the Sahara. While the Sahara was completely gutted many of the bones remain in tact and will be the foundation for the new hotel, resort and casino.

Since you can gamble in just about every state in America today the focus of many Las Vegas hotel-casinos has been on making your vacation in Las Vegas a little different than in the past. No longer is the casino the only focus of the typical Vegas vacation. SLS Las Vegas understands this and will be expand on that new concept of hotel first.

SLS Las Vegas will be an all-encompassing, mixed-use resort and casino. The hotel itself will keep a similar structure as Sahara. There will be more than 1,600 rooms and suites, which is slightly less than Sahara. Judging on renderings on Vegas Tripping the hotel rooms will look great. Modern-Retro seems like a perfect room concept for a new hotel living inside of some older bones.

Fred Segal will operate all of the retail space at SLS Las Vegas. Fred Segal has been a legendary Los Angeles style icon since its namesake founder opened the world’s first jeans-only store in 1960. The retail space and will offer a broad range of merchandise including women’s and men’s apparel, swimwear, jewelry, cosmetics and beauty products, books, art, accessories, a “highly-curated” denim bar and of course a number of Fred Segal-branded items.

James Beard award-winning Chef José Andrés will operate the hotel’s premier restaurant, The Bazaar. Andrés will have another restaurant called Tres. Other restaurants at SLS Las Vegas will include Hollywood hotspot The Griddle Cafe, Katsuya by Philippe Starck, Umami Burger and more.

The casino at SLS won’t be forgotten and it will occupy a lot of space. The casino will be 60,000 square feet consisting of 800 slot and video poker machines and 80 table games. There won’t be a poker room but there will be some sort of sports book operated by William Hill. It seems as if the sports book will be combined with Umami Burger so that you can enjoy a burger and beer while watching the games. Nothing wrong with a burger, beer and some games on TV.

SLS Las Vegas is scheduled to open this fall on the north end of the Vegas Strip where the Sahara once stood. When it opens you should see the construction of Resorts World Las Vegas across the street. Resorts World isn’t set to open until 2016 but we’ll get to see SLS Las Vegas in a few months.