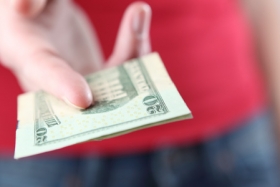 The $20 Trick sounds like a myth but in Las Vegas it’s real and it can be spectacular. The $20 trick is simple and has been used in Las Vegas for many years and in many forms. Slipping a $20 bill as a tip has been used in nightclubs, restaurants, hotels, etc. to get upgrades that included entry to a club, a better table in a restaurant or a nicer hotel room. Today, the $20 Trick is mainly kept to the hotel check in desk. Greasing the doorman with a bill at nightclubs doesn’t work the same way that they used to. In fact, it hardly ever works now that clubs can charge thousands of dollars for a table and bottle service. However, slipping the front desk attendant a tip while you’re checking in still works and that’s called the $20 Trick.

There’s actually a method to making the $20 trick work without getting anyone in trouble since desk agents aren’t supposed to accept tips. When you check into a hotel you simply slip the front desk agent a $20 bill with your credit card and ID when you’re prompted. When you hand over the “$20 sandwich” you ask if they have any complimentary upgrades available. That’s it. It’s that simple. Generally the front desk agent will check to see if there are any upgrades available and if they can’t find anything they will return the $20 tip. It’s almost risk free unless you feel like leaving the $20 with the agent.

Hotel room upgrades using the $20 Trick can range anywhere from an awesome view of the Vegas Strip all the way up to a Penthouse Suite. The $20 Trick is so renowned that there’s a website, appropriately called thetwentydollartrick.com, where people can learn how to best do the $20 Trick and get tips on hotels where the $20 Trick works best.

The $20 Trick doesn’t work all of the time but it works enough to be worth the attempt. As of the time writing this blog almost 85% of people on thetwentydollartrick.com have been successful. A cynic would say that this is a high rate as most people don’t like to write about when they lose or fail at something. Regardless of the 85% accuracy this is a small price to pay for any upgrade.

The $20 Trick isn’t the only way to score a free hotel room upgrade in Las Vegas. Sure a little cash can go a long way but I’ve secured excellent hotel room upgrades by telling the agent specifically that I don’t need or want a Vegas Strip view. I never spend time gazing out my window at the view so I prefer having some extra room in my room. I find that it’s much easier to get a free upgrade to a bigger hotel room, or a suite, without a view of the Vegas Strip.

Ultimately upgrades will only be given if they’re available. If you’re in Las Vegas for New Years Eve there’s probably no way you’ll get any kind of upgrade unless you pay for it. At the same time if you’re in Las Vegas in the quiet times of December (before Christmas) the chances of getting upgraded are great since there are much less people in the hotels. I’ve been told hotels are only around 20%-30% capacity during the week before Christmas.

I consider $20 trick a form of gambling since there’s no guarantee that it will work. With that being said, you should only pay for an upgrade if you have the extra money to lose. You won’t always get free upgrades or $20 Trick upgrades in Las Vegas but it never hurts to try.