Ring in 2018 at The Fremont Street Experience 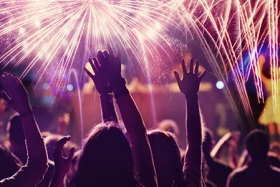 Las Vegas has become the place to be in America for New Year’s Eve. Times Square might have tradition of dropping the ball at midnight but that’s so 1900′s. Las Vegas has more extravagant entertainment and parties than you’ll find in New York City. The fireworks at midnight on the Vegas Strip have become iconic over the years. The days surrounding the change of years are probably the busiest in Las Vegas.


Hundreds of thousands of people will be partying in Las Vegas for New Year’s eve. About 99% of those people won’t be from Las Vegas. If you’re looking a party with more variety you might want to head downtown. New Year’s Eve in downtown Las Vegas is intimate and has a variety of people and entertainment that you might not find elsewhere in Las Vegas. Make no mistake, just because the party is smaller, the Fremont Street Experience is always packed for their New Year’s Eve party.

This is the one night of the year where you’ll have to pay admission to enjoy the entertainment and revelry. Tickets start at $35 per person for to enter the Fremont Street Experience for the night. Hotels might offer a complimentary wristband since you’re staying the night. This is officially the New Year’s Eve party of Las Vegas. America’s Party Downtown is hosted by Las Vegas Mayor Carolyn Goodman.

Beginning at 6 pm, guests can celebrate the new year with non-stop live entertainment from 12 bands on four stages. This year introduce a dedicated EDM stage. In addition to entertainment on four stages, you can watch the traditional ball drop in Times Square as if you were at home or inside a hotel room at 9 pm.

This year guests will enjoy the worldwide premiere of The Killers’ new music video montage on Viva Vision on the canopy at the Fremont Street Experience. The new show features hits such as “Mr. Brightside,” “When We Were Young” and “The Man”. This show will be part to the rotation that features Green Day, The Who, Tiësto, and more in 2018.

Throughout the evening, guests will also be treated to onstage pyrotechnics, dazzling visuals, dancers and aerialists, theatrical, roaming entertainment and an unforgettable Viva Vision year-in-review montage above. If that’s not enough action, you can ride the massive Slotzilla zip line above the crowd.

This promo video for New Year’s Eve at the Fremont Street Experience doesn’t do justice to how busy the party gets.

Pre-sale tickets for America’s Party Downtown are on sale now starting at $35 (plus tax and fees). Nevada residents with a valid I.D. can purchase tickets on-site at the SlotZilla box office and receive a $10 discount. The box office is next to the SlotZilla takeoff tower on Fremont Street between 4th Street and Las Vegas Boulevard. Prices will increase the closer to New Year’s Eve. Ticket prices rise to $40 from December 26 through December 30 and $45 on December 31.

You can find more information and buy tickets for America’s Party Downtown at vegasexperience.com.