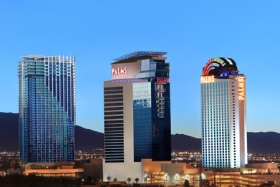 Palms Casino Resort was sold to Station Casinos in May last year for $312.5 million. The deal became official in late 2016. Many Station Casinos properties have a similar vibe so onlookers have been curious to see how the property would change.


When the Palms first opened in 2001 it was a hot spot for tourists, celebrities, and locals. The owners of the Palms found a way to make a casino that was friendly to very different crowds. As a tourist at the time, I never knew that there was a “locals” side of the casino. I would enter through valet and hit the tables before heading to the nightclub.

That feels like an eternity ago. The Palms is no longer the hot spot it once was. It has felt like a locals casino for the past 4 or 5 years. There’s nothing wrong with being a casino for locals but it was just not the same. Everything at Palms could change with new ownership.

The goal of their new “Social Experience Group” is to not only bring Palms up to 2017 standards and to look into the future. Palms won’t be just another Station Casino. The property will have a new vibe and offer amenities appealing to younger customers of today while still being a Station Casino. The challenge is creating something cool and hip while keeping the core local customer. Sounds familiar.

The first major change at the Palms was the closure of 24 Seven Café. It’s been renamed as Lucky Penny Café and will offer typical 24-hour café food. The Bistro Buffet will be renovated and turned into a food hall concept.

The future of buffet is slated to open before the end of the year. Details haven’t been released for the food hall but it could be something similar to Harrah’s Fulton Street Food Hall. The buffet has always been a big deal for Station Casinos and the locals will certainly keep an eye on this change.

The “World’s Largest Hooters” restaurant was recently closed. It will be replaced by a new restaurant called Social Table in July. There will be indoor and outdoor seating at Social Table, which is described as a gastro grill. Details are sparse but I expect to see fancy burgers, craft beer and high-end pub grub you’d normally find at a gastro pub.

The video poker machines will remain at the Social Table bar so this could make for a great place to grab a beer and play a little video poker. Hopefully, Station Casinos offers the full-pay Bonus Poker games at this bar that you’ll find at Red Rock Casino and Green Valley Ranch bars.

According to Eater, Station Casinos is also working to upgrade the pool and nightclub experience at Palms. Meanwhile, one thing that won’t be changed (for now) at the Palms is the fine dining. The Las Vegas Review-Journal says that N9NE Steakhouses, Nove Italiano and Alizé will remain open for the time being.

The future at the Palms looks bright. There will be new restaurants, bars, casino floor, pool, and an updated nightclub. While the changes are all looking to the future it sounds like the reinvention of the Palms is almost like going back to when it first opened.

Want to check it out yourself? Book your room at the Palms with this offer and receive a $25 Daily Dining Credit.