Pac 12 Basketball at MGM Grand – Make it a Vacation 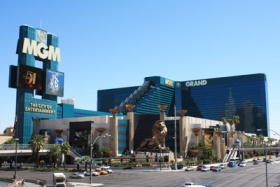 I can feel it is March because I have that college basketball itch! My beloved University of Arizona Wildcats are in the Pac 12 and the tournament is moving from the Los Angeles, Staples Center and relocating to the MGM Grand Hotel and Casino in Las Vegas. The viewership of the tournament had declined in the last couple of years (which is obviously the reason I was able to get a seat in the front row at Staples last year) and the forces that be, believe moving the Pac 12 tournament to Las Vegas will attract more attention. I think they are right! This is yet another good reason to visit Las Vegas in March (as if you needed another reason). What better appetizer for College Basketball March madness than with PAC 12 tournament basketball.

The idea of moving the tournament is brilliant because now you can visit Las Vegas watch a little college basketball, bet on the teams in person and collect your winnings all in the same trip. I have mentioned before that the MGM Grand Hotel and Casino is my favorite place to gamble in Las Vegas. If you are nice, maybe I will tell you the method to my madness at the slot machines (that is for another blog post). The MGM is home to so many fantastic sporting events including UFC fights and these people have hosting a large sporting event down to a science. They know how to get you in and get you out with ease and that is a blessing when you are amongst a large crowd of college basketball supporters in Las Vegas.

Obviously, if people are traveling to Las Vegas to watch their teams from outside of the city (UNLV is not in the Pac 12) then you should definitely take advantage and make a vacation out of the trip. Go get a massage in between games. The MGM spa is good and they have a great nut mixture in the waiting room.

After you pick up your tickets at the box office, which is located outside the arena you will be in the heart of restaurant row. There are so many amazing restaurants in the MGM Grand that you will have to decide according to what type of food you feel like at that hour (then get a snack after the tournament somewhere else or the spa waiting room depending how much money you have left).

Diego Mexican Cuisine is the fist restaurant you see and my parent’s favorite place for Margaritas! They are fantastic and can get you a little “happy” if you don’t watch how many of them you consume. Across from Diego’s is the Blizz frozen yogurt and crepes (you can’t go wrong here). The last time I went to Las Vegas I went to Tom Colicchio’s Craftsteak (his name was not on the restaurants signage until after Top Chef became a hit by the way). I was so impressed with my Caesars salad that I could actually almost say it was my favorite ever! I had the scallops and they were out of this world. The filet is a no-brainer here. Wolfgang Puck’s Bar and Grill is fantastic and if you are lucky enough to get the barley soup of the day you will know immediately what I am talking about. Pair that with the pizza and you are set. Shibuya is overrated and way too expensive. sorry

So, now you are fed, watered and entertained. How about a little gambling and a big Bear Down for the U of A Wildcats in the Pac 12 tournament? (There are two other basketball tournaments in town if you have any time left over).