by marc / Wednesday, 13 February 2019 / Blog Category: Everything Vegas and Nightlife. 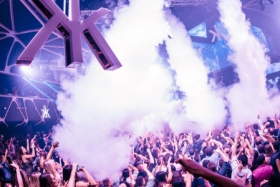 Wynn Las Vegas and the Hakkasan Group recently announced DJ lineups for their respective clubs that cover three casinos in Las Vegas. In addition, there’s a rumor that one of the most popular rappers around will embark on his first ever Las Vegas residence.

Wynn Las Vegas nightclubs are open today and you can enjoy the beats whenever they’re open. However, Wynn will be launching their daylife and nightlife with a massive party from Friday to Sunday, March 22 to 24.

The events will take place at XS Nightclub, Encore Beach Club and Encore Beach Club at Night. The day and nightclubs will host to takeovers from elrow in Ibiza. Entertainment from March 22-24 will be provided by Marco Carola’s Music On, Guy Gerber’s Rumors and more.

The potentially biggest nightlife news in Las Vegas is still not confirmed. The Blast is reporting that Drake will begin his first Las Vegas residency at XS Nightclub inside Wynn Las Vegas. They say the deal between Drake and Wynn will be a multi-year deal with a minimum of 10 shows. Expect to hear more when the deal is confirmed.

When Hakkasan makes an announcement it affects partiers at different casinos the Vegas Strip. Calvin Harris and Zedd will return to Omnia while Tiësto returns to both Hakkasan nightclub and Wet Republic dayclub.

The list of resident DJ’s at Hakkasan venues is long and impressive. In addition to the three returning stars, guests will find the following DJ’s performing at various venues throughout the year:

On The Record Has A Different Kind Of Nightlife

The newest nightlife venue in Las Vegas is offering a slightly different experience than traditional nightclubs. On The Record at Park MGM is a speakeasy, nightclub, karaoke bar and more all inside of one venue.

On The Record just signed DJ/producer Mark Ronson to his first Las Vegas residency. Keep up on the action at the newest nightly venue on the Park MGM website.