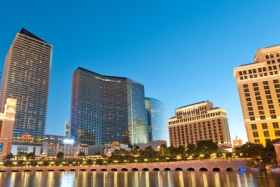 Las Vegas is undergoing a major facelift. I think it’s great because I love new things but other people may find it sad that places and things that they came to love are no longer available. While I’m looking forward to the completion of SLS Las Vegas some people will never step foot in the new hotel because it will sit on the land where the Sahara once stood. Some prefer to keep the past alive. Out with the old and in with the new, I say.

Downtown is a similar story. While many of the older restaurants, bars and hotels still offer cheap dining, drinking and sleeping options the newer places are coming in with price points on the high end of the price scale. You can still get a short stack of pancakes from DuPar’s at the Golden Gate for $5.99 but a fancy hot dog at American Coney Island at The D will cost you almost $5. That’s $5 for a hot dog!

Customer spending in Las Vegas used to be mostly done in the casino on gaming. That hasn’t been the case for a while. Over the past 20 years customers have been spending more and more money outside of the casino on dining, spas, shows and so on. The casino operators are finally catching up with this trend. The Linq and MGM Park area in between Monte Carlo and New York-New York are both focused on providing non-gaming entertainment.

Both areas will feature places to shop, drink and eat. The Linq will have Brooklyn Bowl for concerts and a huge observation wheel where you can relax and take in the sites. The MGM area will be anchored with a huge 20,000 seat arena where you’ll be able to see major concerts and sporting events. Building these areas will cost somebody.

Likewise, new restaurants and bars in Downtown Vegas are replacing vacant or businesses that were still hanging around from the 1950’s. Unfortunately developers have to pay 2013 prices to create these places and not 1950 prices. Again, somebody has to pay for all of this.

All of the new shiny things coming to Las Vegas today are pushing out some of the things we’ve love. I’m all for the new shiny toys but I know I’m going to have to pay for it. The $4.99 buffet on the strip is a thing of the past. A quality buffet at Caesars Palace or Cosmopolitan will cost you as much as eating a meal at a normal sit down restaurant. There’s no savings any more and location doesn’t matter.

Getting a slice of pizza downtown at Pop Up Pizza at the Plaza will cost almost as much as getting a slice of Pizza anywhere on the Vegas Strip. Rent, food and service costs have risen over the years and prices have jumped accordingly. Las Vegas is catching up to the current economy and we’re going to pay for it.

New Vegas is awesome but it comes with a price. I’ve accepted that a burger on the strip will cost $15-$20. I don’t like it but if I want a burger at a strip casino that’s the price. More than ever before I’m noticing that the more luxurious the property the more expensive everything offered has become.

I’m not much of a bargain shopper but the recent price increases at the newer businesses in Las Vegas makes finding those dining deals even that more important on the wallet. If I can find a mix of luxury discounted places to eat, drink and be merry we all win.