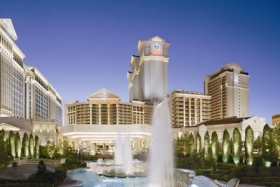 Caesars Palace has changed a lot over the years. When it opened in 1966 the luxury resort had a simple clean design. Here’s a gorgeous postcard of Caesars Palace from 1971 and a timeline of the various expansions for reference.

Today, Caesars Palace is a massive integrated casino resort. Caesars Palace now has five hotel towers, multiple gaming areas, and even an attached mall. The property is sort of a hodgepodge of buildings that were seemingly just placed on open plots of land.

I find Caesars Palace to be fascinating in both good and bad ways. It took me years to memorize the layout of the property. The Caesars Palace we’ve known for the past decade feels as though it was created as new ideas popped up. That’s probably not optimal but it’s what we have.

The first time I stayed at Caesars Palace was for a long four day weekend. I didn’t know where anything was until it was time to leave. It took me numerous visits afterward to know where I was going. Trying to navigate through the property can be confusing and intimidating for new visitors.

At the same time, I marvel at how the property has been put together over the years. Caesars Palace started with a single casino and hotel tower. The property expanded seemingly every few years until the early 2010s. It’s so interesting to think about how the current property came to fruition.

Today, Caesars Palace is refining what it offers visitors. Caesars Palace is swapping out my favorite restaurant for a new concept from Bobby Flay. This spring, Caesars Palace is planning on opening a new sports bar near the Forum Shops. The latter addition could lead to more changes in the future that I won’t speculate on just yet.

Mesa Grill Out, Amalfi In

Bobby Flay’s Mesa Grill closed for good last year. I shed a tear as that was my favorite restaurant at Caesars Palace. It will be replaced by a new Bobby Flay restaurant called Amalfi.

The new concept was inspired by Flay’s extensive travels to Italy and the Amalfi Coast. This will be Flay’s first Italian restaurant. Amalfi’s menu will offer a wide range of Italian foods. Starters will include light antipasti while there will be a large menu of rich pasta and whole fresh fish.

“We have all learned during this unfortunate pandemic, and one of the things I’ve held closely to, is to focus on the things you’re most passionate about—for me, right now, that passion is Italian cuisine, especially from the Amalfi coast,” said Flay. “Food in Amalfi is known for two things, the fish that comes out of the water and pasta. I want to bring the best of the region to Caesars Palace, and every dish that is served at the all-new Amalfi will evoke the flavors and feel of Italy. Mesa Grill has meant so much to me over these last 16 years, but it’s important to evolve and stay ahead of the curve, especially in Las Vegas. The team and I are excited for this next chapter, and we know our loyal guests will love the new experience we have planned.”

Amalfi is on schedule to open later this year.

Slice Out, Stadia Bar In

Caesars Palace recently announced the creation of Stadia Bar. This new sports bar and lounge is on schedule to open this spring. Stadia will offer a “next-level sports viewing experience.” The new bar will feature lavish amenities, numerous large HD TVs, a menu overflowing with high-end and unique cocktail selections, and more.

Stadia will have seating for more than 100 people. It will replace Slice Bar located at the food court and near the entrance to the Forum Shops. It will also be across the casino from the Vanderpump Cocktail Lounge.

This space has been used as sort of an overflow bar for sports fans during large events. I remember sitting in the food court trying to work while drinking coffee during the last World Cup. Not much work was done as I was repeatedly distracted by soccer fans screaming. Work moved to the side and I ended up watching the game with the others.

“Caesars Palace has a long-standing history in sports from hosting iconic events like the first outdoor hockey game to legendary boxing matches,” said Caesars Entertainment Regional President Gary Selesner. “Stadia, located at the busy Forum Shops entrance, is the embodiment of Caesars’ commitment to sports. It offers a comfortable yet luxe environment for fans to catch the action or wager on their favorite team or championship fight, as well as a state-of-the-art, stylish lounge space to experience beyond the game.”

Caesars Palace currently has one of the largest sportsbooks on the Vegas Strip. This addition could take some of the attention away from the massive sports betting venue near Omnia Nightclub.