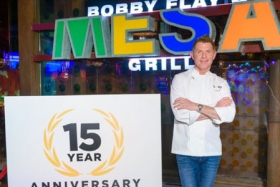 Mesa Grill at Caesars Palace recently celebrated its 15th anniversary. The restaurant opened in the fall of 2004 and has welcomed nearly 2.5 million guests. I don’t find celebrations like this to be interesting very often but this strikes me differently. Mesa Grill is easily my favorite restaurant at Caesars Palace. This is quite a feat for a casino that has 13 restaurants, 7 quick-serve restaurants in its food court, and a mall with another 10+ restaurants.

I’ve never had a bad meal at Mesa Grill. Most meals are above average. Even the iced tea is delicious. Simple dishes like a Cuban sandwich are just better at Mesa Grill than most restaurants (Chica has my favorite Cuban sandwich on the Vegas Strip).

The steaks are fantastic as is one of the signature dishes, the New Mexican Spice Rubbed Pork Tenderloin. While I’m not a Bobby Flay superfan, his steakhouse in Atlantic City – Bobby Flay Steak at Borgata – is one of my favorites in town.

What makes Mesa Grill such a great restaurant is Bobby Flay’s recipes that deliver bold and innovative Southwestern flavors. His skill is more than just adding heat to dishes. There’s always a hint of something different in the dishes at Mesa Grill. The ingredients usually provide a familiar taste with a twist that is never offensive.

“15 years of Mesa Grill at Caesars Palace is an incredible achievement that is owed to the amazing team we have here,” said Bobby Flay. “Mesa Grill has served as a stage for me to showcase my love for Southwest cuisine and ingredients and has also become an integral part of Las Vegas. Not only am I proud of the hard work that happens in the restaurant, but also the work we do in the community, especially with Three Square Food Bank.”

Caesars celebrated the occasion in true Vegas fashion. As you’d expect the ceremony for Mesa Grill’s anniversary was a bit more than just a pat on the back. Flay was surprised with a congratulatory video that featured special messages from fellow chefs including Masaharu Morimoto, Cat Cora, Jet Tila, and fellow Caesars celebrity chef Giada De Laurentiis.

Of course, there was a big party and a special menu for guests visiting around the date of the anniversary. Adding a little fun to the celebration, guests were also invited to contribute to the coloring mural of his beloved Maine Coon cat, Nacho Flay.

Three Square Food Bank President and CEO Brian Burton recognized Bobby Flay and Mesa Grill with the special Extra Helping Award during the celebration. Over the years Flay and Mesa Grill have raised over $135,000 for the food bank. The result is more than 400,000 meals for the Las Vegas community since 2009.