Maximize Your Comps by Choosing the Right Hotel 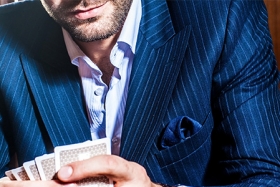 I love visiting the newest and best hotels and restaurants in Las Vegas but I also like to do Vegas on the cheap. There’s a middle ground to my desire to want the best but do it on the cheap. Something I practiced more in Atlantic City before Las Vegas was being the big fish in the smaller casino pond.

All casinos and hotels want to cater to their biggest spenders and being the “high roller” at a less luxurious casino goes a long way to saving money. The same $100 (for example) you spend at a three star hotel is looked at in a better light than the $100 spent at a five star hotel. See, the luxury resort is made for big spenders so the majority of their customers are spending $100. Meanwhile, the mid-tier hotel doesn’t see that kind of spending as often. In an effort to keep your money in their hotel the mid-tier resort will offer more perks to keep your business.

Being the big spender at the lesser hotel in Las Vegas can bring more discounted dinners, shows and free hotel room upgrades. Some of the best hotel rooms I’ve ever had have been when visiting mid-tier hotels in slower times. My gaming and dining budget would get me a basic room for free just about anywhere but at a small hotel I was able to get one of twenty 5 room suites that had a balcony. Seriously, it was the biggest and most well appointed hotel room I’ve ever stayed in. And it was free. It was a room that I could never afford and one that I’d never see again. I asked for an upgrade based on my previous spending with the casino and just happened to be visiting during a slow period. I never forgot that hotel room and would visit this hotel often because there would always be a nice perk like this suite heading my way.

The complimentary offerings from the luxury hotels are always dwarfed by the 3-star hotel that would offer a weekend of free meals and drinks. Sometimes I will receive a full RFB (Room, Food, Beverage) comp and sometimes I would receive an LFB comp where I was given a daily budget. Either way I would be spending a weekend eating and drinking in a complimentary room (or suite) on a budget that wouldn’t get me more than a complimentary room at a luxury resort. Meanwhile the luxury hotel might offer me a comp that would cover breakfast for two. Meh.

I might visit the luxury hotels but they probably wouldn’t get the bulk of my business. The hotel that offers me more perks is the one that will usually win the bulk of my money for a trip. Las Vegas is for high rollers, low rollers and people like me that are somewhere in the middle. The middle roller can save money in Las Vegas simply by aiming a little lower and enjoying the spoils of being the big fish in the small casino pond.