by marc / Thursday, 17 October 2019 / Blog Category: Entertainment and Everything Vegas.

Manilow Residency To Continue In 2020 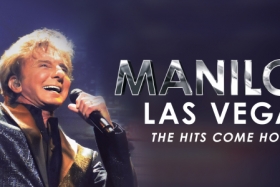 This residency made its debut at the Westgate in May 2018 to rave reviews. Since Barry Manilow returned to Las Vegas his residency has played to sold out audiences. Manilow: Las Vegas – The Hits Come Home has earned the Best of Las Vegas awards for Best Resident Performer/Headliner in 2018 and again in 2019.

This residency is unlike anything Manilow has ever done in his concert tours around the world. The show takes place before massive video walls, unique sets, and special effects. The show is a non-stop evening of Manilow’s massive catalog of Top 40 Hits.

Earlier this year Barry Manilow celebrated his 500th show in the famed International Theater at Westgate Las Vegas. The extension marks the continuation of a partnership between the Westgate and Barry Manilow.

“We are very happy to extend Barry Manilow who leads a long list of legendary entertainers who have performed at this iconic property,” said Westgate Las Vegas President & General Manager Cami Christensen. “Barry is part of our family and the Westgate will always be his Las Vegas home.”

The Las Vegas Residency Is Back

The current “residency” model is more sporadic and flexile. A series of shows are agreed upon by an artist and venue. If the run of shows is successful, the residency continues. If the residency is not a success, it will quietly end and the artist will ride off into the sunset.

Take Manilow: Las Vegas – The Hits Come Home as an example. This residency started because of the popularity of his many years of shows in Las Vegas. The extension announcement is because the new Barry Manilow residency is so popular that it was renewed. The show will be entering its third year at the Westgate in 2020.

Meanwhile, Janet Jackson’s “Metamorphosis” residency at Park MGM might not have had the same success for MGM Resorts. The show grossed more than $13 million according to Billboard. Metamorphosis averaged about 4,000 tickets sold per show for the 6,000 capacity venue.

The revenue for Janet Jackson’s residency is pretty good. However, the number of seats sold wasn’t as good as Bruno Mars or Lady Gaga at the same venue. In general, this isn’t bad but competition is hot in Las Vegas. We can call this a mixed result.

Las Vegas residencies have become special events. The shows are different enough from normal performances that plenty of visitors are planning trips to Las Vegas around these short blasts of shows.

The productions are unique to Las Vegas. While Def Leppard and Bruno Mars will tour the country, their Las Vegas shows are special to their respective venues.