by marc / Thursday, 17 June 2021 / Blog Category: Entertainment and Everything Vegas. 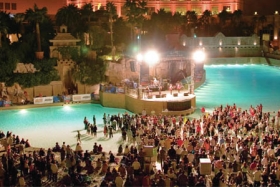 There are signs every week that Las Vegas is returning to the place so many have come to love. An annual tradition returns to Mandalay Bay Beach this summer. The Concerts on the Beach series returns to Mandalay Bay after a hiatus last year due to the COVID-19 pandemic. The first show will take place on Sunday, July 4. The holiday weekend show will include Sublime With Rome. This year Mystic Roots and Hirie will open for Sublime with Rome. Tickets start at $55 ( plus service charges or fees). This show starts at 8:30 pm but most will begin at 9 pm.

The popular outdoor summer music series continues with four additional shows by country superstars Lee Brice and Cole Swindell as well as Latin bands Caifanes and Bronco. Here’s a look at this year’s Concerts on the Beach performers and dates.

This is an intimate show for Brice who has 2.4 billion on-demand streams and over 3.3 billion spins on Pandora. Lee Brice can sell out arenas but he’s playing this smaller show outdoors under the stars in Las Vegas. When he’s not performing Brice is writing and recording songs and building new brands like American Born whiskey.

Swindell is another performer playing an intimate show in Las Vegas. Cole Swindell is a GRAMMY-nominated multi-Platinum superstar. He has nine No. 1 singles and 11 No. 1 singles as a songwriter. His single, “You Should Be Here”, has reached an audience of more than a billion people. Swindell also has eight Platinum singles, a Platinum-certified debut album, and a Gold-certified sophomore album called “You Should Be Here.”

Caifanes is a Mexican rock band that continues to perform since its start in 1986. A lot has changed for the group over 25 years. The band evolves and changes but some things always remain the same. The music that many generations of people have come to love continues. Caifanes is a timeless band that will continue its journey of delivering powerful and emotional concerts to millions of fans.

Bronco will bring its regional Mexican music to another level this summer with a performance at Mandalay Bay Beach. The band has been around for more than 38 years. Bronco has massive worldwide sales exceeding 14 million albums. The band has multiple Gold and Platinum Album certifications. In Mexico, Bronco has sold out some of the most emblematic venues such as El Estadio Azteca, La Plaza de Toros México and Estadio Universitario de Monterrey.

You may notice some holes in the Mandalay Bay Concerts on the Beach schedule. Don’t be surprised if more shows are added later this summer. Visit Mandalay Bay for more information and updates this summer.