Las Vegas is for Meat Lovers 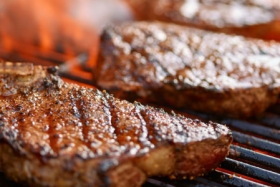 While In N Out Burger is so popular for tourists visiting Las Vegas there are a total of 132 Burger Kings, McDonald’s and Wendy’s in Las Vegas.

Let’s stick to the premise that this report is true and Las Vegas is the best city in the country for meat lovers. There are plenty of great meat restaurants in Las Vegas. I don’t believe in absolute best or worsts because a lot of things can affect every experience. Having said that, here are some great places to eat meat in Las Vegas.

Steak is a passion for me so it’s difficult to narrow this down. Here are a few different steakhouses you can find in casinos:

There are plenty more great steakhouses but this should get you started down the road of delicious steaks. There are two steakhouses that take a slightly different approach to meat.

Jean George’s (Aria) and Bazaar Meats (SLS): Jean George’s is a traditional steakhouse but the short rib is phenomenal. Everything I’ve tried here is phenomenal. This a great restaurant for anyone but especially for meat lovers. Bazaar Meats is more just than a steakhouse. The huge menu is chock full of meat. Dining here is an experience unlike any other restaurant in Las Vegas.

There was a burger joint boom after the steakhouse boom ended in Las Vegas. Fancy craft burgers took a $2-$5 fast food experience and increased the price to $15-$20. While high-end steakhouses demanded $100 meals, the lower priced burger joints offered a moderately priced meal.

Here are a couple of great burgers in Las Vegas:

Holsteins (Cosmopolitan)
There’s only one burger on this menu on the menu for me. The “Gold Standard” has everything from a great burger to delicious toppings. The smoked bacon, aged goat cheddar cheese, baby arugula, and garlic-chive aioli make for a taste explosion unlike most burgers in Las Vegas. Beer drinkers will appreciate the huge list of beer.

BBD’s (Palace Station)
This is one of the newer burger joints in Las Vegas. The vibe here is hard rock and beef. The burgers are on the pricey side ($19+) but delicious. The music ranges from Metallica to AC/DC. While the jams sound loud on a computer screen, they’re low enough to where you barely notice them if you don’t want to. This burger is a great excuse to check out the recently remodeled and expanded Palace Station.

Here are a couple of standout BBQ restaurants in Las Vegas: