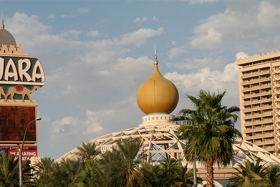 The Vegas Strip has been undergoing a major transformation for the past year or so and the changes will continue through the next couple years. There are new hotels and shopping projects under construction right now with more still being planned.

You can’t go forward without knowing your history. While most of our focus is on what the future of what the Vegas Strip will look like it’s always fun to look back at some of the great hotels that occupied the Strip.

Dunes – Dunes famously stood where Bellagio currently resides. Dunes initially opened in 1955 as a low rise hotel then added a tower 6 years later and another in 1979. You can read all about their alleged mob ties at wikipedia.  The most memorable visual of Dunes was probably its 35 foot tall sultan. Dunes was sold to Steve Wynn in November of 1992 and closed in January 1993. Later that year Dunes was imploded in grand Vegas fashion to make way for Bellagio which opened in 1998 and remains one of the most beautiful hotels on the Vegas Strip.

Sands – Sands is one of the most famous hotels in Las Vegas history. When looking back it’s impossible to think Vegas would be the same without the Sands. This is where the Rat Pack performed and nothing says vintage Vegas like the marquee when Frank Sinatra, Dean Martin, Sammy Davis Jr. and company performed. Sands had a great run but closed and was closed and imploded in 1996 in order to make room for the Venetian and Palazzo. The small hotel and casino just couldn’t keep up with the mega resorts that they Vegas Strip was becoming famous for.

Desert Inn – The Desert Inn was around for 50 years from 1950 through 2000. 50 years in Las Vegas is like 1,000 years in the real world. Even though the Desert Inn was remodeled in 1997 it was closed and imploded in 2000 to make way for an ambitious luxury hotel. Steve Wynn created one of the first mega resorts with the Bellagio and wanted to create something bigger and better after he sold Bellagio to MGM Resorts. He also wanted a hotel with his own name as Wynn Las Vegas opened in 2005 . Shortly after Wynn opened the property expanded with Encore. Not all was lost from the Desert Inn. The golf course was kept saved and renovated by Tom Fazio and renamed Wynn Golf Course.

Sahara – The most recent vintage Vegas closure was the Sahara. Like Sands, Sahara often hosted the Rat Pack and was one of the big celebrity hangouts in Vegas through the 50’s and 60’s. Sahara was the last hotel from the 50’s that remained open but by the time it closed in 2011 it was in great disrepair. Unlike many of the older casinos Sahara wasn’t imploded. Sahara is currently being taken apart and will receive a top down renovation into SLS Las Vegas which will open later this year.