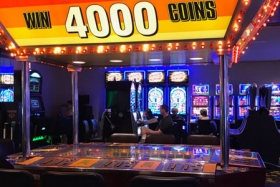 Sigma Derby has a small but incredibly passionate fanbase. The coin-operated horse racing game that was introduced in 1985, only exists in only one casino in the US. The D Las Vegas is the only casino that still has a Sigma Derby game in the country.

Sigma Derby is a funny game. It’s popular enough to have a rabid fanbase. The Sigma Derby group on Facebook has nearly 2,000 rabid members. That’s more than you’d expect for a game that’s only available in one casino throughout the entire country.


Theoretically, the excitement for Sigma Derby combined with a relatively large house edge should also make the game popular for casinos. That’s not the case. The large 20%-25% house edge should be great for the casino beancounters. However, the slow pace of play and the minimum wager of 25 cents doesn’t make it very profitable.

The last Sigma Derby machine in circulation is in danger for reasons beyond popularity and profitability. Thanks to coronavirus there’s a coin shortage in the US. Technically, there isn’t a shortage. However, there are just fewer coins in circulation due to the increase in electronic payments and the lack of overall spending in the country due to COVID-19.

Sigma Derby is a massive draw for The D. The game is almost always packed with players dropping quarters into the machine while they watch the mechanical horses bounce up and down while racing every couple of minutes. The proximity to the Vue Bar doesn’t hurt.

Visitors to Las Vegas will sometimes head directly to The D specifically to play Sigma Derby. The shortage of coins will theoretically put the game in danger. If there aren’t any quarters, nobody will be able to play Sigma Derby. It’s difficult to imagine a casino using this much floor space on a game people can’t play. If nobody plays Sigma Derby, the game will have to be retired.

The D is rewarding guests who bring in POUNDS of quarters with an “I Helped Save Sigma Derby” hat or t-shirt.

We’re pretty sure you’ve heard about our new promotion, but if not, listen to this priceless exchange with our owner @derekjstevens and VP @mikepalmcirca (and check out their limited edition #SigmaDerby swag)!

As they said above one (1) pound of quarters will get a “I helped save Sigma Derby” t-shirt. If someone brings in three (3) pounds of quarters they will get both a t-shirt and a hat. Simply bring the quarters to the casino cashier at The D to get the goods. Just a heads up, the promotion will only last until supplies run out.

There are many reasons Sigma Derby is popular. In addition to the low minimum wager, simplicity is one of the key reasons. All you have to do is pick the first two horses to pass the finish line. If your pick is correct, you take home the corresponding quarters based on the odds. For example, a quarter bet at 10-1 odds will pay 10 quarters plus the original wager.

Sigma Derby is inexpensive to play and the game is located right near the Vue Bar at The D so getting a drink usually isn’t a problem. The game can be quite charming for anyone who loves casino nostalgia – especially after a few cold ones.

A New Entry To The Horse Racing Game

Sigma Derby isn’t for everyone. The coins are filthy. The horses don’t run smoothly. There are only a handful of wagers available. After a few drinks, the speed of the game might be fast enough but it can be somewhat boring otherwise for some people. That’s often the case with games from 40 years ago.

Konami released a new horse racing game called Fortune Cup just a couple of years ago. This is a good option for someone who wants to play a horse racing game but needs more action and doesn’t like the dirty fingers from touching change.

Fortune Cup only takes dollar bills and has many more ways to bet than Sigma Derby. The improvements make the horse racing appear better. However, there are plenty of horse racing game fans that prefer the old Sigma Derby game.

Unlike Sigma Derby, Fortune Cup can be found in multiple casinos in Las Vegas and around the country. The game is a little more complex but it’s another option for horse racing game fans.