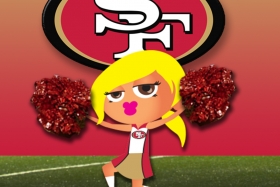 We are quickly approaching one of the best weekends to travel to sin city. As if you needed an excuse? That’s right! It is February and we are close to one of the most exciting events in professional sports. Yes, the Super Bowl. I might be slightly biased because my San Francisco 49ers are making their first appearance at the big show in years to play (win) against the Baltimore Ravens in New Orleans. It is Super Bowl XLVII or if you haven’t been paying attention “Harbowl” where for the first time in history you can watch two brothers competing against one another in quest for the title, famous Super Bowl trophy (and those big rings don’t hurt either). This means there are even more bets to be made and you could make history if you choose the winning brother (Jim – of course).

No matter where you watch in the country, you can find people cheering on their beloved or jumping on the bandwagon for either team because of a variety of reasons such as their team is located on the same coast as the Niners or the Ravens, they grew up in either San Francisco or Baltimore, or (even the best reason of all) there is a player on one team that your wife, girlfriend, or daughter thinks is “good looking”. Whatever the reason you choose the side you do, you don’t want to miss the party in Vegas! As with any event of such magnitude, it will bring the die-hard fans and the bandwagon jumpers from all around the country to converge, gamble, party, and revel in Las Vegas.

You will find great sports books up and down the Las Vegas strip. You can choose from the list of many but one thing is for sure, you should go to Las Vegas for the Super Bowl and bet. Bet on the brothers, the team, and even your favorite commercial. You can go to the biggest or the smallest but trust you will not be disappointed in your decision to travel to Las Vegas for the soon to be infamous Super Bowl on Sunday Feb 3, 2013.

I enjoy watching sports at a few key places on the strip. Caesars Palace Race and Sports Book, Las Vegas Hilton Eight Pole Bar, MGM Grand’s Race and Sports Book seem to battle it out as the top 3 places to watch and bet on sports. They all boast ample amounts of large screen TV’s, various betting options, and comfy seating. I enjoy the VIP treatment at Mandalay Bay Race and Sports Book as well. Stop by Blondies at Planet Hollywood for a good cheer with their cheerleaders or take a short cab ride to the Sports Deluxe at the Hard Rock to listen to good rock n’ roll and look at sports memorabilia in between time outs. I heard that Lagasse’s Stadium at The Palazzo is something I need to check out this next trip. There are also a lot of smaller bars in between the large casinos where you can watch the game if you don’t feel like betting. Cabo Cantina is always fun. They have strong blended drinks and the famous “Waboritas”. What more could you want? One thing is for sure, get a seat early wherever you go, grab some grub, whatever drink you fancy and bet wisely. Sit back and enjoy! You will not be disappointed no matter which sports book or bar you end up retiring at for Super Bowl Sunday.

Up next….Pac 12 tournament and then March Madness. So place your bets, win and scope out your favorite bar during Super Bowl XLVII so when you return in March you can enjoy the best events in college sports. Who is with me?

Editors Note: Melany is running a Contest on her blog. Make sure you enter for a chance to win $100 to the NFL store. http://melanysguydlines.com/superbowl-contest-free-stuff/