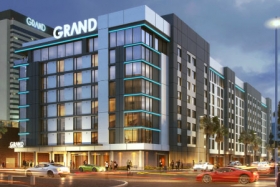 The Gallery Tower at Downtown Grand is now accepting room reservations for guests visiting beginning Tuesday, Sept. 22. It’s entirely possible you forgot about the expansion at Downtown Grand. The announcement came around the same time as Circa Resort & Casino announced it would start construction in January of 2019.

“After 18 months, we are thrilled to be nearing the end of development for what will be known as the Gallery Tower,” said John Culetsu, VP and Managing Director of the Downtown Grand.”

What’s In A Name?

Culetsu continued, “Not only will we be able to welcome more guests with the addition of 495 new rooms, but our guests and visitors will experience Downtown Grand in an entirely new way through the one-of-a-kind art program that will be noticeable throughout. We look forward to enriching the guest experience with the westward expansion of Downtown Las Vegas’ renowned art scene.”

The Gallery Tower at Downtown Grand is inspired by the dynamic art program that will be woven throughout the property. The new 495-room Gallery Tower will feature multiple art pieces of varying scales, inside and out. Downtown Grand has a specially curated team of independent artists for the property. The new hotel tower will also include an augmented reality in-room experience exclusive to certain rooms.

The original hotel towers at Downtown Grand were built using the bones of the old Lady Luck Casino. The Gallery Tower will feature brand new hotel rooms built from scratch so there will be a new look and features that might not be available in the older hotel rooms.

The Gallery Tower at Downtown Grand will pair contemporary architecture with modern design and art from several mediums. This new hotel tower will offer a vibrant new entrance to the hotel’s casino floor.

The small hotel tower is only seven floors tall but will be large enough to add another 495 hotel rooms. These rooms are in addition to the existing 629 already at Downtown Grand. Altogether, Downtown Grand will have a total of 1,124 rooms.

The new tower will allow the property to provide a boutique-style hotel experience for the modern traveler. The Gallery Tower will also offer guests a variety of room options. The tower includes 67 studio units, 20 one-bedroom suites, and three 1,500-square-feet Presidential Suites. To accommodate the additional room inventory, Downtown Grand has expanded its current fitness center footprint to offer more than 1,500-square-feet of state-of-the-art workout space.

The Gallery Tower will allow a little separation from the main casino-hotel at Downtown Grand. The building is separate from the main structure by a short 10-15 second walk. This will give guests a feeling of being separate but still a part of the casino action.

Downtown Grand isn’t the only casino in the area offering hotel rooms outside of the main property. In 2009, El Cortez opened the Cabana Suites. The hotel offers 64 “suites.” These rooms are located across the street from the casino in the former Ogden Hotel.

These aren’t the opulent suites you’d expect on the Vegas Strip. Rather, these are more like larger hotel rooms with relatively modern retro decor. It’s a different look and feel than the main hotel rooms at El Cortez.

The Cabana suites don’t have any amenities so you’ll have to cross the street to the main property to enjoy anything from gaming to dining.