How to get around Downtown Vegas for FREE 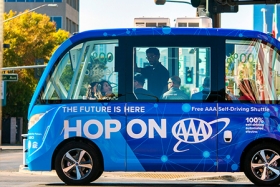 Getting around Las Vegas is fairly simple. It isn’t too difficult to navigate the Vegas Strip or downtown Las Vegas. It’s easy to figure out the non-touristy areas of Las Vegas once you learn the highway system and local streets.

There are now two new ways to get around Las Vegas that won’t cost you a penny. In fact, one of the modes of transportation isn’t available anywhere else in the United States.

The area known as “Old Vegas” is a small part of Downtown Las Vegas. The actual downtown area is much larger than many people would think. The free shuttle bus will bring you to parts of the area you might normally skip or take a car service to. Here’s the routing of the Downtown Loop:

The only downside to this free shuttle service is that it isn’t available 24/7. You can catch the free Downtown Loop during the following hours.

Visit LasVegasNevada.gov for more information on the Downtown Loop.

Driverless Shuttle
Las Vegas is the first city in the country to offer a driverless bus. This small shuttle doesn’t travel very far but it’s a fun and free way to get around a sliver of downtown Las Vegas. The autonomous bus on holds eight people and has a route shorter than a mile.

This one-of-a-kind pilot program was introduced in November of 2017 and scheduled to continue until November of 2018. The driverless bus circulates the Fremont East area and has three stops.

You can easily walk to these locations, but why not sit inside of a driverless bus to experience the short ride? File riding the free and adorable driverless bus under “things you can only do in Las Vegas.” The shuttle is scheduled to run between 11 am – 6 pm daily.