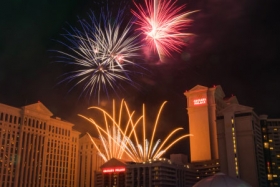 Las Vegas is rapidly returning to the place so many people remember from 2019 and before. There are multiple concerts, residency, and show announcements every day. It’s almost overwhelming until we remember that this is Vegas…baby! This is the action we’ve been craving for the better part of a year.

It’s been pretty fantastic seeing friends (online and IRL) visiting and sharing pictures and videos enjoying Las Vegas the way they used to. Las Vegas will take another massive step forward on July 4th and throughout the summer.

July 4th will mark the return of Independence Day fireworks on the Vegas Strip. Resorts World Las Vegas will celebrate its grand opening that same night. The property is still opening on June 24 but the big bash will take place a couple of weeks later.

The Fourth of July fireworks celebration on the Vegas Strip will be the first time the Las Vegas Convention and Visitors Authority (LVCVA) is presenting a fireworks show on this day. This doesn’t matter on the surface but is a sign of how important this day will be for Las Vegas returning to “normal.”

The LVCVA is using this day as a way of celebrating the return of live entertainment as Las Vegas reopens to 100% capacity. At 11 p.m. July 4, Las Vegas will launch a themed and coordinated fireworks spectacular from the rooftops of casinos up and down the Vegas Strip. The following properties will be a base for the Grucci Family fireworks show:

“Las Vegas is a city built on hospitality and entertainment, and we are thrilled to welcome visitors back from around the country,” said Kate Wik, chief marketing officer for the LVCVA. “The excitement throughout the destination is palpable, and we know the pent-up demand to visit is real. We have been waiting for this moment to announce that once again, your ‘Only Vegas’ experience is waiting.”

If you’re not a fan of the Vegas Strip you can also watch fireworks off the Strip at the Plaza (downtown), Green Valley Ranch (Henderson) and Red Rock Casino (Summerlin).

The Return Of Las Vegas Entertainment

Entertainment started to return to Las Vegas last year but has shifted into overdrive this year. Las Vegas has removed all COVID-related capacity limits. In fact, entertainment is returning to Las Vegas quicker than most cities.

Removing the capacity limits is helpful to venues. More seats mean the shows can generate enough revenue to operate. Las Vegas is a stop on national tours like most large cities. This brings entertainment you can find elsewhere but that’s just the beginning.

The residencies and stage shows are static so they can take place with appropriate health and safety measures for the performers and audience. This is making it easy for the talent to operate in a bubble if they so choose.

The combination of all three is allowing Las Vegas to bring back more entertainment than most cities.

Take a look at just some of what’s on tap for Las Vegas this summer.