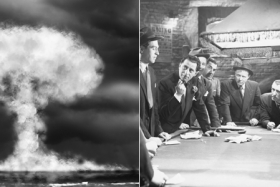 Visiting the traditional and best known sites in Las Vegas is fun and exciting, but sometimes when you take a side trip off the beaten path, you can learn some interesting things about Las Vegas. Many people know all about the casinos, gambling, showgirls, high quality entertainment and nightclubs of Las Vegas. Few know about museums in Las Vegas that showcase some of the interesting and sometimes morbid history of the cosmopolitan city. These past events have helped to shape Las Vegas into the city it is today.

Some visitors may not realize that in the 1950s extensive nuclear bomb testing went on in Nevada’s deserts and that the testing was also visible from the hotels on the Las Vegas strip. Stories have been told of casino patrons who pulled up chairs to the windows of Las Vegas’ most famous casinos. From there, they were able to watch gigantic mushroom clouds fill the sky in the distance due to the testing of bombs about 60 miles away.

Another part of Las Vegas’ history that is not always well-known is the influence of organized crime. Mob members, who lived very colorful lives and often had questionable past histories, had a huge impact on Las Vegas’ development in the 1950s. Two intriguing museums help to teach visitors and residents some of this history that cannot be forgotten. The lessons are taught in entertaining and informative ways.

People old enough to remember the years of the Cold War, and those too young to remember, who have only read about the events in textbooks, are fascinated by the information stored in over 8,000 square feet of the Atomic Testing Museum of Las Vegas. This museum is affiliated with the Smithsonian Institution in Washington, D.C. Incredible artifacts are on display there, from photographs to 1950s style propaganda, interactive exhibits and real equipment used in bomb testing facilities during those years. Visitors can also take part in a realistic film experience featuring subtle vibrations and puffs of air, which add to the film.

The Nevada Test Site, as it was known then, was located about 65 miles outside of Las Vegas. It was the only nuclear bomb testing facility of its kind in the United States. Bomb testing took place both underground and in the air. There were around 830 underground tests done, along with about 100 tests done above ground. Testing was controversial, which is part of the reason that barren desert land in Nevada was chosen as the testing site. Scientists searched for places where there was no population nearby and they found it in Nevada’s vast, mostly barren desert.

Visitors to the Atomic Testing Museum can read real quotations by workers who were there when the bomb tests were going on. Touch screens featuring questions and answers add to the learning experience. One very interesting exhibit includes articles that were a part of popular culture when atomic testing was going on. This included toy atomic bomb rings that kids could find in cereal boxes, candy with names like Atomic Fireball and comic strips. Pop culture was affected by the nuclear age in many interesting ways.

Many people do not fully realize the impact that the Mob had on the development of Las Vegas, until they spend an afternoon walking through the exhibits of The Mob Museum. This museum is found on the corner of Third Street and Stewart Avenue in Las Vegas, near Fremont Street. It was created by the same people responsible for creating the Rock and Roll Hall of Fame in Ohio, and Washington D.C.’s International Spy Museum. There are three floors to cover in this museum, so it is recommended that visitors allow several hours to view all the exhibits.

The main attraction is the original courtroom where hearings took place in 1950 and 1951. Known as the Kefauver hearings, these court trials were televised. They were one of the first court room trials ever televised for the public to view. They drew a huge audience out of fascination for both the subjects they covered and curiosity about the notorious mobsters who were on trial.

Two Sides to the Story of the Mob

The interesting thing about The Mob Museum in Las Vegas is that the displays effectively tell both sides of the story of the Mob influence in Las Vegas. The side of law is highlighted along with all the ways they used to track down and catch mobsters, as well as the colorful stories of mobsters themselves and the vast variety and intensity of criminal activities they were involved in.

Probably one of the most memorable pieces in the museum is a piece of the original wall where the St. Valentine’s Day massacre occurred in Chicago in 1929. Seven members of the Moran gang were murdered that day and this piece of the wall serves as a stark reminder of the brutality shown by mobsters and gang members. It has been called the most violent crime in America. Another shocking display is a model of an electric chair like the one used at Sing Sing prison. Artifacts of items that belonged to famous mobsters like Meyer Lansky, Benjamin “Bugsy” Siegel, Al Capone, Tony Spilotro, Sam Giancana and other famous characters add to the museum’s fascination.

More to Las Vegas than Casinos and Gambling

Both of these fascinating museums stand as a testimony to the intriguing and colorful history of Las Vegas. Spending a day out of the heat of the Las Vegas summer is best done in the air-conditioned comfort of either the Atomic Testing Museum or The Mob Museum in Las Vegas. Take a fascinating journey back into the 1950s, into the heyday of Las Vegas, and experience some of the city’s most intriguing history first hand. It is an unforgettable trip through many of Las Vegas’ most colorful memories.