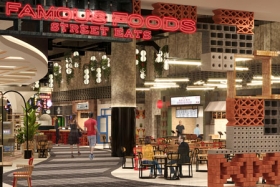 Now that Virgin Hotels Las Vegas is open all eyes are on to the next casino opening in Sin City. Resorts World Las Vegas remains on schedule to open this summer. Resorts World recently announced it will open its doors to the public June 24. Even though summer doesn’t technically start until June 20, this weekend is the unofficial kick-off to the summer season in Las Vegas.


While construction on Resorts World comes to a conclusion we’re getting another peek inside the property. The new casino on the north end of the Vegas Strip a 24,000-square-foot street food destination called Famous Foods Street Eats. This quick-serve eatery will be the next evolution of Las Vegas food halls found at the Cosmopolitan and Harrah’s.

Famous Foods Street Eats is the brainchild of Zouk Group who will also operate the nightclub and dayclub at Resorts World. The food hall will introduce an Asian hawker-inspired concept with authentic street food and cuisines from around the world.

Famous Foods Street Eats will feature 16 diverse quick-serve eateries called “food stalls”. Top chefs and restaurateurs from around the world will be featured. This will be the only destination in the country with the most Michelin Plate and Bib Gourmand recognized concepts under one roof.

In addition to the food stalls, Famous Foods will feature a 16-seat center bar and a speakeasy hidden within the depths of the food hall. If the speakeasy at a food hall sounds familiar think about Block 16 at the Cosmopolitan. Ghost Donkey is a hidden lounge behind what appears to be a fire exit inside the food hall at Cosmopolitan.

“Famous Foods will transport guests to an authentic Asian hawker market – an experience that’s never been replicated in the U.S.,” said Andrew Li, Chief Executive Officer of Zouk Group. “After months of planning and carefully curating the perfect mix of partners, Zouk Group is thrilled to be able to unveil this special culinary concept to the city of Las Vegas, and equally as excited to bring it to the Strip’s most anticipated new resort.”

The Famous Foods experience sounds like a fun experience for foodies. Guests can enjoy Michelin star meals at an affordable price. They can also learn about the different cultures and origins of these authentic cuisines.

While the concept comes from Asian culture, the food hall will offer dining from the east and west.

These dining options all come to Resorts World from the Eastern Hemisphere.

As you’d imagine, the western food stalls will offer different dining options than the east. However, there may be some eastern twists on western dining.

This part of the food hall will also be home to Famous Foods Center Bar and Here Kitty Kitty Vice Den hidden speakeasy. This sounds like a great quick-serve dining option at Resorts World.