by marc / Thursday, 22 July 2021 / Blog Category: Entertainment and Everything Vegas.

Family-Friendly Magic Shows On The Move 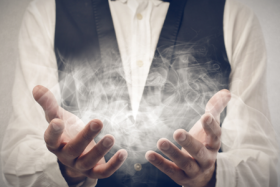 In May, Caesars closed or didn’t reopen many of its smaller shows in Las Vegas. Wayne Newton, Anthony Cools, and Chippendales are some of the more popular names that won’t be returning to Caesars’ properties. Some of the shows are already lining up new homes. For example, Mac King is relocating from Harrah’s to Excalibur. Magician Xavier Mortimer is moving to The Strat.

Look for more to do the same in the near future. Chippendales tweeted that they already have a new home. Look for that announcement any day. Keep your eyes peeled for more shows changing homes. In the meantime, let’s take a look at two of the family-friendly shows on the move.

Mac King is taking his comedy magic show to the south end of the Vegas Strip beginning June 22. The family-friendly Mac King Comedy Magic show will perform for 70 minutes inside the Thunderland Showroom at Excalibur Tuesday through Saturday at 1 p.m. and 3 p.m. The show will be dark Sunday and Monday.

“I can’t wait to get back on the stage in my new home at Excalibur after not being able to perform over the past year!” said Mac. “I look forward to saying ‘howdy’ to audiences again and entertaining them in this newly remodeled, state-of-the-art showroom.”

Mac King has been a staple of entertainment on the Vegas Strip. He’s performed at different casinos on the famed street for more than two decades. According to MGM Resorts, King is regarded as the number one comedy magician working in the world today. That’s probably hyperbole but I don’t speak magic humor.

Xavier Mortimer “The Dream Maker” at The Strat

Magician Xavier Mortimer recently announced his move to The Strat. His new show, “The Dream Maker” opens on July 1. The show will perform nightly, except Tuesdays, at 6 p.m. inside The Strat Theater. Mortimer previously performed at Planet Hollywood and Bally’s where he was part of the Magic Attic.

“There’s nothing like performing in front of a live audience and I am thrilled to finally be able to get back on stage in Las Vegas after a 15-month break,” said Mortimer. “Plus, I’ll be bringing some of my top online illusions to the stage for the first time in our new home at The Strat. This will be an all-new, updated show that will be more magical and entertaining than ever.”

Mortimer has added his own touch to magic by making a show with creative and original illusions, comedy, and a poetic storyline. “The Dream Maker” will be another magic show for the whole family to enjoy.

Mortimer is more than just an on-stage performer. He has more than five billion views online, and 10 million followers. Mortimer is still the first-ever Cirque Du Soleil featured performer to have his own headlining show on the Strip. He’s appeared on TV shows such as America’s Got Talent, Masters of Illusion, and Penn and Teller Fool Us.