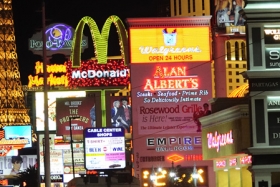 Drug stores are popping up all over the Vegas Strip and they’re a great opportunity to save money. Just a couple years ago there were only a couple drug stores on the Vegas strip – one at The Venetian and one near Monte Carlo and Aria. Now you’ll find a two floor Walgreens just outside of Planet Hollywood and across the street from the Cosmopolitan. Drug stores will be opening when the current renovations are finished at both Treasure Island and the Tropicana. So, what’s the big deal? Saving money is kind of a big deal.

Casinos were once designed to keep you lost and confused so you never went outside. There were no clocks (still aren’t any), dizzying carpeting and few signs. Casinos were designed to house everything that you could ever need on your Vegas vacation so there was no point to leaving. Confusion is no longer the focus of casino design. The idea is still to keep you on the property but necessarily inside and definitely not to confuse you. Signage has improved and most things that you’ll want outside of the slot machines and gaming tables are easy to find.

Digging a little deeper into the casino business you may have noticed that casino operators are now treating these hotels differently than they used to. Casino owners are looking at themselves as casino operators and landlords. Penn National (Owners of M Resort in Las Vegas) even put some of their holdings into a Real Estate Trust. Many restaurants, bars, clubs and shops aren’t owned by the casino operators. Rather, the spaces are being leased out to franchises to operate and the casino collects rent.

Some places like restaurants with celebrity chef’s name attached may charge more for a meal. However, some other places that are rented out will actually allow you to save money while on the Vegas Strip. If you want a bottle of water before heading back to your room you used to have to pay the jacked up rates in the vending machines on each floor or at the casino general store. Now you can stock up on water from a drug store for a savings of almost 50% in some cases. The same can be said for snacks, gum and even toiletries.

Look at it this way. Buying snacks and drinks at a drug store just outside of the casino (and soon inside the casino) will save you enough money for your next session of video poker. If you’re a drinker you’re in for more savings. The drug stores have ample amounts of booze available (the Walgreens near Planet Hollywood even has a walk-in refrigerator) for you to make your own drinks before heading out for a night on the town. That can turn into a huge savings.

Drug stores aren’t cool. They don’t belong on the Vegas Strip that I grew up with. I didn’t want to like them but you know what? I’ve become okay with drug stores. We don’t have a choice who the casinos choose to rent their space to so we might as well make the best of it. It’s difficult to totally dislike drug stores if they can help save enough money to spend more on the things we like on the Vegas Strip.