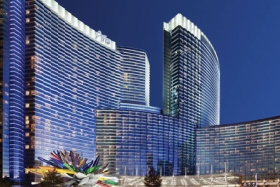 I’ve visited every casino on the Vegas Strip over the years. I’ve stayed at many, but not all, hotels in the tourist corridor. Last year I had multiple friends stay at Aria and I visited more often than any year since I moved to Las Vegas. Although I’ve never slept at Aria, I’ve seen the beautiful technology-forward hotel rooms. The rooms are luxury quality at a lower price point than you’d pay at one of the top tier Las Vegas casino-resorts.

I rarely gamble at Aria after way too many losses when the casino first opened. However, I visit Aria often because of the great restaurants. In fact, I probably visit the casino more often to eat and drink than any other reason. Just about every restaurant at this casino-resort is excellent. I don’t eat buffets often but I always enjoy the food at Aria’s buffet.

If there’s a downside to the dining at Aria, it’s the prices. As you’d expect there’s a typical Vegas Strip markup. I’m used to paying more money at restaurants on the Vegas Strip so it doesn’t bother me. There can certainly be sticker shock if you’re not expecting a markup on already high fine dining restaurant prices.

That said, almost every meal I’ve paid for has been worth the extra money. My first meal at Carbone was pricey but it was delicious. If you’re looking for a great meal in Las Vegas there are lots of options at Aria.

Julian Serrano Tapas is another favorite at Aria. This restaurant occupies a rather large space and that makes it pretty lively. The small plates and wine are great for a group lunch, brunch or early evening snack before hitting the town.

Here’s a quick look at the dining options: