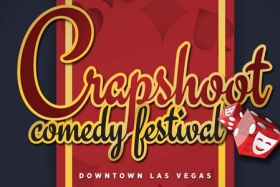 Las Vegas is one of the entertainment capitals of the world. There are fabulous shows and concerts almost every night of the week. However, there is one thing that’s noticeably missing from Las Vegas entertainment – comedy. I’m talking regular visits or residencies from touring comedians with name value.

Comedy clubs come and go in Las Vegas more often than most people notice. The Aces of Comedy series at The Mirage is a good option for very mainstream comedians. However, those are special engagements for some of the most popular comedians in the country. Las Vegas is host to some of the best touring concerts and shows, so it’s surprising that there hasn’t been a single steady comedy club for mid-sized touring standup comedians.

Many of these touring comedians appear in movies, TV shows, standup specials but don’t quite have the pedigree of the big names who can fill large theaters and arenas. Well, that might be about to change. The Crapshoot Comedy Festival will be coming to Las Vegas from May 18-20, 2017. The festival will bring more comedians to Las Vegas than we might normally see in 6 months.

The festival will take place all around downtown Las Vegas and be focused heavily on performance rooms in the Fremont East area. Crapshoot Comedy has already put down roots in downtown Las Vegas by presenting the comedy programming at the Life Is Beautiful Music and Art festival. Sean Patton, DJ Douggpound, Byron Bowers and Emily Heller all performed at this year’s festival. This is a big step for comedy in Las Vegas. It was the first time that Life Is Beautiful featured comedy.

According to The Laugh Button website (they also have a podcast) “The Crapshoot Comedy Festival is designed to be the premier Las Vegas comedy festival featuring nationally recognized stand-up comedians, as well as popular podcasts, screenings and much more.”

The Crapshoot Comedy Festival isn’t just a one-off idea. The festival is organized by the team that put organized the fantastic Maui Comedy Festival. That festival was chock full of familiar names and faces. There was something for anyone that likes today’s comedy from the alt to the funny people who appear in movies. Here’s a sample of who performed in Maui.

If you’re looking for more information of the festival, you can sign up to receive updates at crapshootcomedyfestival.com. If you’d like a little more background on the festival, Vegas Seven interviewed Paul Chamberlin, owner of Crapshoot Comedy.