by marc / Friday, 07 May 2021 / Blog Category: Entertainment and Everything Vegas.

Cirque is back in Las Vegas 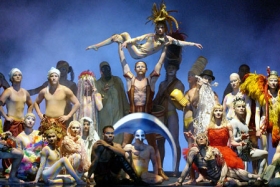 The reopening of Las Vegas continues with sports, concerts, residencies, and stage shows that Sin City is famous for getting ready for the summer. Shows in Las Vegas are being announced almost every day and people are ready to have some fun. Tickets for UFC 264 at T-Mobile Arena in July sold out in minutes. Garth Brooks‘ sold-out show at Allegiant Stadium will finally take place in July as well. Usher is even adding six more dates to his Caesars Palace residency. Unlike most extensions, these shows will happen sooner than later with six performances this summer.

National tours and sports travel across the country. While residencies have always been popular, the stage shows are still a trademark of Las Vegas. Cirque Du Soliel is the preeminent stage show producer in Las Vegas. After being closed for more than a year, some Cirque shows are returning to Las Vegas stages.

“This is the moment we have all been waiting for,” said Daniel Lamarre, President and CEO of Cirque du Soleil Entertainment Group. “Almost 400 days have passed since we had to take a temporary hiatus, and we have been anxiously awaiting our return to the stage. I am so proud of the resilience of our artists and employees who persevered during the most challenging times with stages dark around the world for so long. I just can’t wait to see the lights go back on.”

Cirque Du Soliel shows are a big deal for many visitors to Las Vegas. These shows are just the beginning. Great entertainment options are returning to Las Vegas at a furious pace.

Resorts World recently announced its opening date and some musical partners. The residencies of those partners haven’t been officially announced yet. Dates should come soon as capacity restrictions are lifted. Before the year is over, you should see dates for Celine Dion, Carrie Underwood, Katy Perry, Luke Bryan, Tiësto, and Zedd at the newest casino in Las Vegas.

As previously mentioned, Usher added some shows to his residency at Caesars Palace. He’ll be performing shows on August 4, 6, 7, 11, 13, and 14. These are in addition to the shows already scheduled for July.

Bruno Mars will be returning to the Park Theater inside Park MGM this summer. Unlike his previous resident shows these are all clustered in one month. Mars will be performing on July 3, 4, 9, 10, 23, and 24.

If you’re looking for a laugh you can head to Comedy Cellar at Rio or Comedy Works at the Plaza in downtown Las Vegas. Brad Garrett’s Comedy Club at MGM Grand was one of the first comedy clubs in Las Vegas to reopen.

If magic and illusions are your things, Penn & Teller have limited shows at Rio in May and June. Mat Franco’s “Magic Reinvented Nightly” is already open at The Linq.

Nightclubs and dayclubs are back in action too. Wynn recently announced The Chainsmokers, David Guetta and others will be resident DJs at its clubs.

If you’d rather be the person on stage, karaoke is also back!

Entertainment is quickly returning to Las Vegas. These are just a few of the recent announcements. New shows and events are announced daily. Check the shows and attractions tabs for up-to-date listings if you’re getting ready to return to Las Vegas.