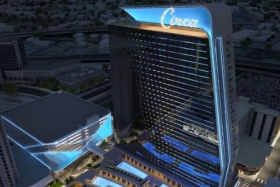 Circa Resort & Casino keeps revealing different features of the new resort and casino being built in Downtown Las Vegas. Frankly, everything the new casino has revealed sounds great. The latest news from Circa is about the dining options.

Unlike most casinos located in the Fremont Street casino area, the Golden Nugget and Plaza have a good variety of restaurants located on the property. That’s all. It looks like we’ll be able to add Circa to the list of properties with a wide variety of eateries when it opens in December.

Circa is slated to open sometime after in mid to late December this year. Construction on the casino is about halfway complete. Circa remains on schedule and on budget. The newest casino in downtown will feature five original restaurant concepts that will offer a different kind of cuisine.

“While each owner brings a diverse background to Circa, they are united by their passion for customer service and Downtown Las Vegas,” said Circa CEO Derek Stevens. “In addition to incredible food, they’ll deliver the spirit of fun and community that’s integral to the Circa experience.”

Circa will feature fine dining, casual dining, and quick-serve restaurants. While the restauranteurs and concepts might sound familiar, each restaurant will be unique in Las Vegas.

This restaurant is related to Le Thai, which is located in the Fremont East section of downtown Las Vegas. Not coincidentally, Club One rewards from The D and Golden Gate (sister casinos to Circa) can be redeemed at Le Thai.

This will be the first downtown Las Vegas venture from Chef Barry S. Dakake and Make It Happen Hospitality. This restaurant will deliver steak and seafood, fresh tableside preparations and creative cocktails.

The name behind this restaurant should sound familiar as Chef Barry was previously at N9NE at Palms. Barry’s Downtown will bring another classic, yet modern, steakhouse to downtown Las Vegas.

You might be familiar with Project BBQ if you frequent downtown Las Vegas. This will be the first permanent food truck and Carolina barbecue joint on the Fremont Street Experience. They will serve gourmet smoked brisket, pork, chicken and more.

Project BBQ’s signature “Garbage Bowl” will include handmade potato chips covered in smoked meats and decked out with a trio of Carolina BBQ, beer and cheese sauces, then topped with applewood-smoked bacon and coleslaw.

Derek Stevens couldn’t open a new casino without an outlet from Detroit. Saginaw’s Deli will be restaurateur Paul Saginaw’s first new restaurant outside Michigan. He’s the mastermind behind Ann Arbor’s famed Zingerman’s. You can currently get coffee and snacks from Zingerman’s at The D.

This restaurant was created by American Coney Island’s Chris Sotiropoulos and Grace Keros. Victory is the first new concept from the brand’s founding family in over a century. The sports bar’s menu will offer gameday staples including specialty burgers, wings, and appetizers.

Guests can watch sports via TVs throughout the space and enjoy prime views of the three-story screen in Circa’s sportsbook.