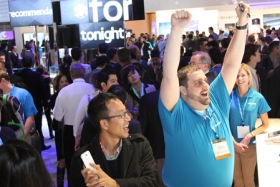 2013 comes to an end this week but we’ve been planning for 2014 for months. Las Vegas is home to many conventions but the largest of them all begins January 7. The Consumer Electronics Show (better known as CES) show takes place from January 7 through 10 mostly at the Las Vegas Convention Center. CES has grown so much in recent years that you can find parts of the expo at the LVH (next door to the convention center) and the Sands Expo & Convention Center at the Venetian.

Tech companies from all over the world come to Las Vegas to show off all kinds of new technology ranging from household appliances to robotics to computers and televisions. There are tens of thousands of people looking at the new tech toys for work and play every day. Last year there were 150,000 people at CES! This makes navigating CES a bit of a challenge.

Before CES even begins you’re going to want to prepare for what you’re about to see and do. CESWeb has a few first timer resources that are specific to the conference. These are all useful resources but they don’t offer everything you’ll need. One of the most important pieces of packing for CES will be your footwear. Make sure you have comfortable walking shoes because there is a lot of walking between the 3 buildings of the Las Vegas Convention Center. You’ll also walk to and from transportation through various hotels then hitting sponsor parties at night.

Probably more important than clothes is packing extra batteries and chargers for your mobile devices. Chances are that you’ll be on your mobile phone(s) and/or tablet(s) much of the day. There will be extra wifi stations and mobile phone towers but the amount of people using their devices will still put a strain on everyone’s battery. Be prepared with extra batteries, battery cases and chargers. It’s almost impossible for some of us to function without a mobile phone nowadays.

Many CES veterans will tell you to arrive early on the first day just to get your badge. The later you go for your badge the longer you’ll be wasting time in line. That’s possibly the least productive way to spend time at a conference – especially one this big. Once your badge is acquired stay calm. Don’t try to see and do everything at once. Slow your roll. You have time. Don’t try to see and do everything at once. Plan which sectors you want to see in advance so that you can spend time with all of the awesome tech at CES, not just wandering the halls looking for stuff.

Another reason to arrive at CES early is the traffic. There will be a lot traffic. Imagine the worst traffic you’ve experienced and double it. Seriously. Leaving early will allow your shuttle to get you into CES relatively quickly. My last visit to CES I took a shuttle from the Venetian around noon one day and it took almost an hour to do about a mile to the Las Vegas Convention Center. Cabs won’t be any quicker since they have to sit in the same traffic. If you plan on driving you’ll have to deal with finding a parking space in addition to the traffic. An alternative form of transportation is to rent a bike. This is a newer but increasingly popular idea.

One of the benefits of a conference this big is that many of the large companies offer cool promo items. They’ll also have famous people signing autographs. If you plan to take on some of the more fanboy/fangirl aspects of CES you might want to bring your own tote bag, shoulder bag or backpack. It can get a little cumbersome when you walk around a convention with bags on bags on bags so consolidating is a nice option. Additionally you can use your own bag for extra phones, batteries, shoes, etc.

The Consumer Electronics Show is huge and awesome. It’s fun for tech dorks (like me) and a important part of work for people in the tech world. Prepare for CES, be comfortable, arrive early and have a great time!